Columbus, OH, 2017-Jun-02 — /EPR Retail News/ — IKEA, the world’s leading home furnishings retailer, today (May 31, 2017) announced that when its Columbus, Ohio store opens on June 7, it will recognize loyal, enthusiastic customers by giving away thousands of dollars in gift cards and merchandise – including an iconic EKTORP sofa for each of the first 44 adults in line, and a POANG armchair for the next 100. Other highlights include a free mattress for the first 44 adults on Thursday, June 8 and Swedish Food shopping spree for the first 44 on Friday, June 9. Customers may begin lining up at 9 a.m. EDT on Monday, June 5 – 48 hours before the store’s opening at 9 a.m. EDT on Wednesday, June 7. Ohio Lieutenant Governor Mary Taylor, Columbus City Council President Pro Tem Priscilla Tyson, Deputy Chief of Mission for the Swedish Embassy Göran Lithell, IKEA U.S. president Lars Petersson and store manager David Garcia will officially open the store.

IKEA Columbus is the Swedish company’s second store and restaurant destination in Ohio, 44th in the United States, and 397th worldwide. (The state’s first IKEA store opened in Cincinnati-area West Chester in 2008.) The 354,000 square-foot future IKEA Columbus store, with 1,100 parking spaces, was built on 33 acres at the northeastern corner of Interstate-71 and Gemini Place in the Polaris Centers of Commerce. The store reflects the unique architectural design for which IKEA is known worldwide, and includes one of Ohio’s largest rooftop solar arrays – consistent with the solar presence at 90% of U.S. IKEA locations – as well as three electric vehicle charging stations.

The June 7 ceremony also will include Delaware County Commission President Jeff Benton raising the U.S. flag, Honorary Swedish Consul General for Malou Monago raising the Swedish flag and Westerville Mayor Kathy Cocuzzi raising the state flag of Ohio. Individual store coworkers will sing the respective American and Swedish national anthems, and “America the Beautiful” prior to the opening remarks. Entertainment for customers waiting in line will begin at 6 a.m. EDT on opening day. “Just as the IKEA store concept will introduce a new way of shopping for the home, we want customers waiting in line to visit our store to enjoy the unique experience too,” said David Garcia, IKEA Columbus store manager. Store visitors will have opportunities to enjoy benefits from the grand opening of IKEA Columbus, including:

ADDITIONAL OFFERS AT IKEA COLUMBUS
IKEA Columbus is a fun day out for the family with:
• Småland, a supervised children’s play area (for children 37”-54” in height) that replicates the look of a typical Swedish farmhouse and forest;
• Additional play areas throughout the store, offering activities for kids shopping with parents;
• A “Children’s IKEA” area in the Showroom that also offers fun, interactive play; and
• Attention-to-detail amenities such as family-friendly parking, strollers and baby care rooms.

No shopping on an empty stomach at IKEA Columbus because:
• The IKEA Restaurant opens 30 minutes earlier than the store for a full hot breakfast, including scrambled eggs, potatoes, turkey sausage and Swedish pancakes for only $2.00.
• The 450-seat restaurant also offers a diverse menu featuring lunch, dinner, snacks and dessert, including Swedish specialties such as the popular IKEA Swedish meatballs (as well as chicken or veggie versions), seafood plates, pasta, chicken, salads, sandwiches, and vegetarian dishes too.
• Menu choices for kids include a child’s portion of Swedish meatballs, chicken fingers or macaroni and cheese, while baby food and bibs are available for even younger visitors.
• The Swedish Food Market offers Swedish delicacies, snacks and treats, and frozen Swedish meatballs (the same ones available in the Restaurant) to purchase and then prepare at home.
• The Exit Bistro serves hot dogs, pizza, cinnamon buns, frozen yogurt, sundaes and beverages.

When IKEA Columbus opens, there will be 397 IKEA stores in 48 countries, including 44 in the U.S. Since its 1943 founding in Sweden, IKEA has offered home furnishings of good design and function at low prices so the majority of people can afford them. IKEA has been included in rankings of “Best Companies to Work For” and strives to be an employer of choice. IKEA incorporates sustainability into day-to-day business and supports initiatives that benefit children and the environment. For more information see IKEA-USA.com, @IKEAUSA, @IKEAUSANews, or IKEAUSA on Facebook, YouTube, Instagram and Pinterest. 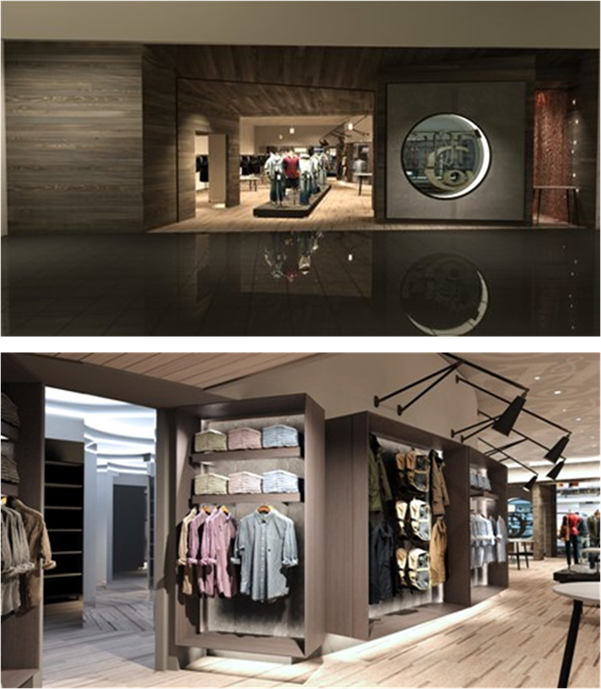 New Albany, Ohio, 2017-Feb-07 — /EPR Retail News/ — Abercrombie & Fitch (NYSE: ANF) today (February 6, 2017) announced that for the first time in more than 15 years, it will unveil a new store concept.  The store will open on Friday, February 17th, at the Polaris Fashion Mall in Columbus, Ohio and 20% of all opening weekend sales will be donated to Nationwide Children’s Hospital.  Designed by MJ Sagan Architecture, which was also involved in the creation of the company’s New Albany headquarters, the prototype’s look and feel is in line with the brand’s new evolution.

This boutique, which is 4,860 feet in size, is the first of seven that will be built this year and provides the customer with a new vision of the brand. In line with the changes that have taken place over the past eighteen months, the space was imagined with the best customer experience in mind, encouraging the discovery of the brand’s new collections.

“It is important that our stores reflect what the Abercrombie & Fitch brand is today, so we’ve created a new space for our customers, that is warm, inviting, inclusive and open. We are excited for customers old and new to rediscover what is at the core of this American Heritage brand: timeless, high-quality clothing that you want to live in,” said Stacia Andersen, Brand President of Abercrombie & Fitch and abercrombie kids.

The striking updates begin at the entrance. The storefront is transparent and features a metal sculpture of an A&F logo first used in the early 1900s. Upon entering the store, the customer will discover two shop-in-shops: a fragrance “apothecary” and an area for seasonal capsule collections. There will also be a dedicated denim room.

Mannequins for both genders will live on a concrete platform that runs from the storefront through the middle of the store, showcasing the key trends and ideas for the current season. Throughout the store, the collections will be merchandised to inspire the customer and showcase how pieces can be mixed together.

Looking to provide a unique and personal shopping experience, the updated layout includes accommodating features such as, innovative fitting rooms and omni-channel capabilities.

The fitting rooms will serve as a comfortable haven from the mall or street, comprising two individual capsules within a larger, private suite. This allows each guest to share new looks with a friend or family member while also enjoying privacy. Each suite has thoughtful amenities that heighten the customer’s mood, including separate controls for light and music, as well as a phone charging dock.

With a focus on seamless service, associates will be on hand to help shoppers place and pick up online orders in store. Furthermore, cash wraps will be located throughout the space, enabling a quicker and more accessible checkout experience.

The interior features a cohesive palette of modern, tactile materials including cork, bronze, galvanized steel, concrete, vegan leather, wood and marble that act as a neutral but complimentary background to the collections. The store will be subtly scented with a lighter, cleaner, gender-neutral fragrance.

About Abercrombie & Fitch:
The Abercrombie & Fitch brand is the iconic global specialty retailer of high-quality casual luxury apparel and accessories for men and women.  With an updated attitude that reflects the character, charisma and confidence of today’s 20+ consumer, Abercrombie & Fitch remains true to its 125-year heritage of creating expertly crafted products with an effortless, American style.