Arlington, VA, 2014-10-10— /EPR Retail News/ — The National Grocers Association (NGA) is pleased to announce that Greg Gregerson, president and CEO of Gregerson’s Foods and Pharmacy, Inc., has been presented with the NGA Spirit of America Award at the Alabama’s Food Industry Finest Luncheon, held Wednesday, October 8. The award is one of NGA’s top honors and recognizes individuals for their dedication and service to the independent supermarket industry.

“It’s an honor to recognize Greg, who has always been a strong advocate for Alabama grocers and the independent supermarket industry, with the Spirit of America Award,” said Greg Ferrara, Vice President of Public Affairs, NGA. “Greg has been a steadfast industry leader who truly understands the importance of educating lawmakers on industry issues, and a mentor to many within the independent supermarket industry. Our industry, as well as Gregerson’s Foods and Pharmacy, and the communities it serves, have greatly benefited from his commitment and service throughout his career.”

Mr. Gregerson has been in the grocery business in some capacity or another since 1969. In addition to running several successful businesses, Gregerson has served on several industry related boards, including serving as a Past Chairman and Chairman Elect of the Alabama Grocers Association, and a Past Chairman of the Alabama Retail Association. He has also previously served on the Board for NGA, the United Way, Riverview Hospital, Westbrook Christian School, Etowah County Hospice, and Compass Bank in Gadsden.

The NGA Spirit of America Award, established in 1982, honors key industry and community figures that have provided leadership in the areas of community services and government relations on behalf of a free and independent food distribution system. NGA has given this award to over 550 individuals, including Presidents George H. W. Bush and Gerald Ford, as well as other distinguished individuals serving in the grocery industry and the public interest.

If you need additional information, please contact Laura Strange at 703-516-8808. 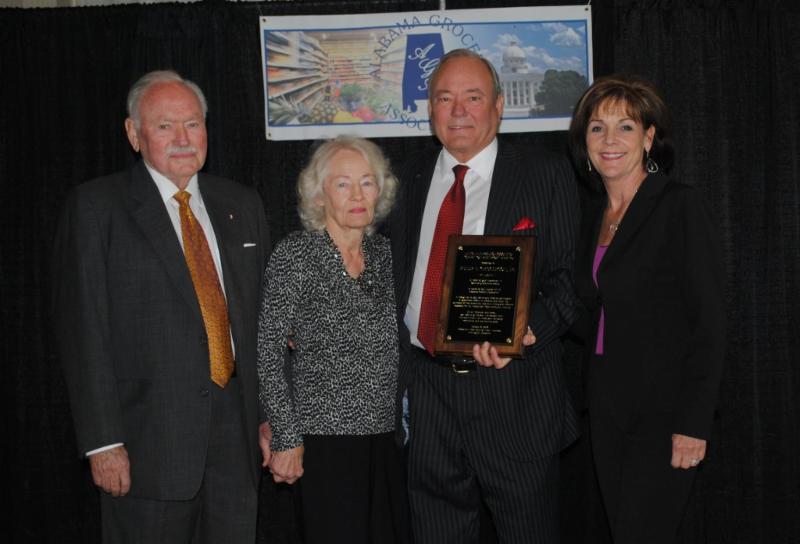 Greg Gregerson (center) is joined by his parents, Peter and Janet Gregerson, and his wife, Marcy as he accepts the NGA Spirit of America Award