Littlewoods Direct, the UK’s leading online and home shopping retailer, has revealed the men’s products it predicts will be the top sellers this Christmas.

The Littlewoods Direct Home Online Shopping site provides several top ten toy lists split into gifts for boys, gifts for girls, as well as providing top ten gifts for dads along with ideas for what to get mums.

For those wishing to lounge about watching DVD films in front of the television this Christmas, the Family Guy Freakin’ Party Pack is available from Littlewoods Direct, featuring all six seasons of the popular U.S comedy show on DVD as well as an exclusive poker set. Season one of The Unit, the American drama series detailing the daily life of an elite United States Special Forces unit from two perspectives, the Unit and the home front, is also available. An appropriate item to accompany those enjoying a day sitting in front of the TV during this festive season is the Carlsberg Draught Master, capable of dispensing a five litre keg of Carlsberg or Carlsberg Export. 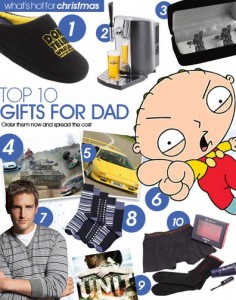 Offering an entirely different kind of Christmas present is the Driver’s Choice Experience Day, which allows the participant to learn the skills of expert rally drivers including handling a car on loose surfaces or tarmac, driving off-road in 4x4s and even military tank driving. Participants can also learn all about skid control and life saving techniques for adverse conditions.

In a similar vein, Littlewoods Direct also have the Lamborghini Thrill Experience Day, allowing drivers to enjoy speeding around a track in either a Diablo, one of the world’s most exotic supercars, or a Gallardo, the first car to feature the new Lamborghini V10 5L engine and boasting a top speed of around 200mph.

A number of clothes items are also set to be popular items for men this Christmas including stylish Mens Knitwear such as Brooker Y-neck jumpers, formal socks and the Ben Sherman men’s survival kit, consisting of a pair of black boxer shorts, a bottle of shower gel and a toothbrush and comes in a elegant Ben Sherman presentation box. Football fanatics will also enjoy a pair of chrome football cufflinks, with a choice of Arsenal, Chelsea, Liverpool, Manchester United, Tottenham and West Ham themed cufflinks