Sustainable entrepreneurship and sustainable waste management go hand-in-hand. We’ve known this for some time: Carrefour Belgium was already been committed to keeping its waste production down, recycling as much of it is possible, making use of its undersold stock and raising the awareness of both its suppliers and employees of this issue. But Carrefour wanted to go even further.

Carrefour is striving to be an environmentally-friendly retailer

For several years now, its customers have been able to make an active contribution to an environmental programme that involves saving energy, limiting waste production and implementing a sustainable form of consumption. They could, for example, bring their batteries back, depositing them in collection boxes that Bebat had set up at store entrances.

An initial trial was carried out in 5 stores. It got under way in August 2013 at stores in Evere, Waterloo Mont-Saint-Jean, Herstal, Borsbeek and Oostakker.
A module made up of 4 special containers was set up at the entrance to each of these stores in a special recycling area that was highly visible and clearly marked out.
Essentially, customers can drop off their torches, batteries and power cells and small household appliances, having already removed their batteries and power packs, as well as their oils and fats, packaging them in sealed bottles.

Six months later, the trial has been a success. The initiative has been very well received and Carrefour Belgium has decided to roll out the module across the whole country.

As of 28 February, practically all Carrefour hypermarkets now have these containers, except for a few stores (which are being renovated or which do not have enough room for them). Carrefour has exclusive access to the recycling areas throughout the launch period.

Through this initiative, Carrefour is striving to get the general public to adopt an environmentally-friendly attitude and emulate its approach.

Because waste management is something for which we are all responsible! 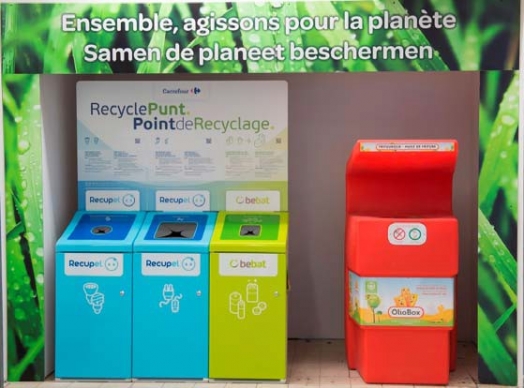 Carrefour in Belgium work with Bebat, Recupel and Atravet to help its customers recycle