Positioned as one of the ‘market leaders’ for offering customers pole and line caught skipjack tuna across all our own brand tuna products from canned through to sandwiches and ready meals.

Sainsbury’s ‪was given the special award of ‘Top tuna supermarket’ for our 100% pole and line own brand tinned tuna and for having remained at the forefront of tuna sustainability for many years. We were also recognised for extending this level of standard to own brand products such as sandwiches and salads.

Ally Dingwall, Aquaculture & Fisheries Manager, Sainsbury’s says: “It’s great to be awarded the top spot again and recognised for the work we do to source our food with integrity. We’re the UK’s largest retailer of MSC and Freedom Food fish and we proudly offer our customers pole and line caught skipjack tuna across all our own brand tuna products from canned through to sandwiches and ready meals.

“Last year 100% of the canned skipjack tuna sourced from the Maldives and canned under Sainsbury’s own label became Marine Stewardship Council (MSC) certified and labelled. This is a significant step forward in protecting the world’s tuna stocks and is the result of four years’ work by the Sainsbury’s fish sourcing team.”

It groups the top five brands as ‘market leaders’ which encompasses Sainsburys, the Co-operative, Waitrose, Morissons, Marks & Spencer.  Sainsbury’s ranked number one in 2008 and joint first in 2011 in the tinned tuna league table. 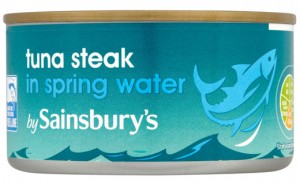