LOS ANGELES, 2014-3-10 — /EPR Retail News/ — Germany is the most sought after retail market in the world, with 40% of global retailers planning to open a store there in 2014, while U.S. retailers dominate large-scale expansion plans, with almost half aiming to open 40 stores or more, according to the latest research from CBRE Group, Inc.

Germany is by far the most attractive global retail market ahead of France, United Kingdom, Austria and China. Global retailers are attracted to Germany as it offers the opportunity to target 20 large cities in one market. More than 40% of retailers globally plan to open a store in Germany in 2014, and this figure increases to 70% when taking into account only European retailers. Germany is also the second most important target for American retailers. 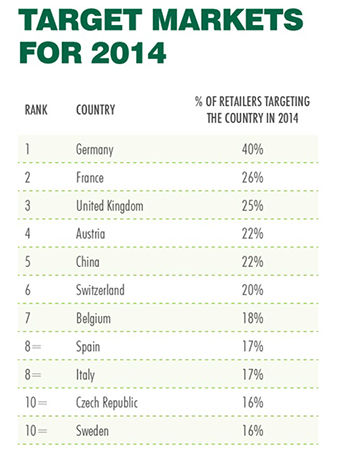 The amount of retailers with large-scale expansion plans has increased dramatically in 2014, revealing a renewed confidence in the global retail market. More than one-third (35%) of retailers plan to expand their store portfolio by 40 stores or more over the next 12 months. Of those retailers looking to open 40 stores or more, Mid-Range fashion and Value fashion are the most active sectors, accounting for one-third of the total each.

“An upturn in consumer confidence and renewed vigor in the global retailer community has put large scale expansion firmly back on the agenda. While the pace of international growth has slowed in recent years, retailers are making clear their intention to materially invest in their store networks throughout 2014. Their preference for a wide range of markets highlights the continued importance of cross-border growth,” said Peter Gold, Head of Cross-Border Retail, CBRE. “Germany is on top as the market of greatest interest to retailers this year. The countries continued appeal reflects the strength and scale of the economy and the successes of several big brand new entrants.”

American retailers have the most extensive large-scale expansion plans with almost half (47%) of retailers surveyed looking to open more than 40 stores in 2014. The U.S. is the largest retail market in the region, and unsurprisingly, the most important target market for retailers based in the Americas—almost half (43%) are aiming to expand there in 2014. However, due to the maturity and competition of domestic markets, many North American retailers are seeking to grow their global businesses, providing the opportunity to expand on a large scale. U.S. retailers are targeting European markets in particular, with 19% looking to open stores in Germany this year and 14% in the U.K., Canada, France and Austria.

“American retailers are increasing looking beyond their domestic borders in 2014. Several major U.S. retailers have been active across Europe in recent years, with the understanding that they cannot expand indefinitely in a competitive domestic market and that international growth is an imperative,” said Anthony Buono, Executive Managing Director, Retail Services, CBRE. “With consumer confidence returning across many markets in Europe, we expect this trend to continue to grow and diversify in 2014 and beyond.” 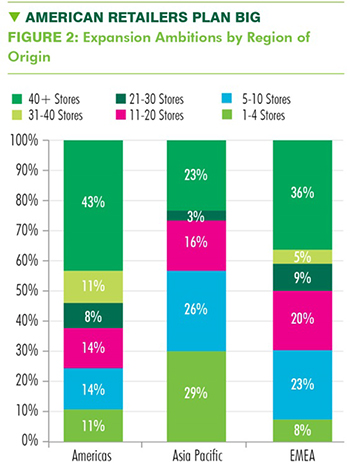 Note to editors:
In its fifth edition, CBRE’s How Active are Retailers Globally? has expanded to survey retailers from across the globe.More than 130 retailers, based in Europe, the Americas and Asia Pacific were surveyed to explore the number of stores they are looking to open and the markets being targeted in 2014. Retailers were also asked about their plans to enhance their online transactional capabilities.