March 20, 2014, Sarah “The Cheese Lady” Kaufmann will begin the championship process of carving a 640-pound block of Wisconsin Cheddar Cheese.  Kaufmann’s work will be titled “Hoops Fever” featuring basketball art and logos from various North and South Carolina collegiate teams. Come show support and catch a little Hoops Fever as you witness the unveiling of the carving.

Kaufmann is no amateur to cheese carving; she is a team player who loves to carve mascots, athletic heroes and local attractions. In December 2012, Sarah exhibited her talents in Morrocroft Village Harris Teeter with a carving of Harris Teeter’s mascot, Harry the Happy Dragon, along with Carolina Panthers’ mascot, Sir Purr. Also, in November 2011, in a Washington, D.C. Harris Teeter, Sarah carved a tribute to Wounded Warrior Project™.

Sarah loves to share her passion for cheese, so please visit the Ballantyne Commons Harris Teeter to take your picture with Sarah and speak to her about her unique profession while you sample and shop.

The grand unveiling will occur Sunday, March 23 at 11 a.m.

Sarah will be available each day during specified hours listed below: 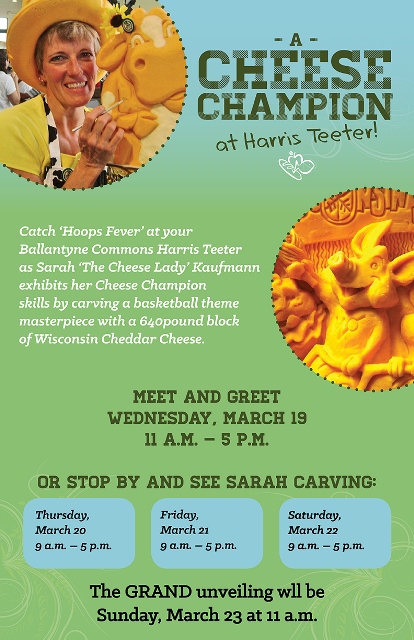