Throughout his career, Scholz has been a steadfast industry leader, steering many successful state and federal legislative efforts on a number of critical issues that have greatly benefited the grocery industry in both Wisconsin and the nation.

“It’s an honor to recognize Brandon for his outstanding leadership and resilient commitment to the independent grocery sector, not only in the state of Wisconsin, but for the industry as a whole. His participation and involvement in various educational and advocacy programs and industry events have raised the visibility of the independent grocer.  He is held in the highest regard by the industry, his members, and elected officials throughout the state of Wisconsin,” said Peter J. Larkin, President and CEO of NGA.

Prior to joining WGA, Scholz led a 15-year career on the local, state, and national political levels, serving as the Chief of Staff to Congressman Scott Klug (R-WI-2), and other various political appointments under Wisconsin Governor Tommy Thompson.  Scholz recently served on both the NGA Board of Directors and the Food Industry Association Executives Board of Directors, and currently serves on the Advisory Board of WisPolitics.Com.

If you need additional information, please contact Laura Strange at 703-516-0700. 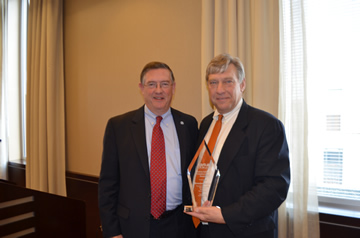