British Athletics announces the Sainsbury’s Anniversary Games will be held in the iconic setting of Horse Guards Parade Ground and The Mall in central London.

To commemorate London 2012, the event at Horse Guards Parade Ground and The Mall on 20 July will transform the landmark into what will surely be the most striking athletics arena in the world with pole vault, long jump, shot put and a whole host of track races in a full athletics programme taking place over two sessions in front of a crowd of 20,000.

Tickets for last year’s Sainsbury’s Anniversary Games sold out in 75 minutes, but with the Olympic Stadium unavailable due to transformation works, British Athletics, Sainsbury’s, Mayor of London and The Royal Parks will continue to mark the occasion of hosting the event on the anniversary of the London 2012 opening ceremony.

Boris Johnson, Mayor of London, said: “Last year’s sell out Sainsbury’s Anniversary Games were yet another great example of how London is now a natural home for international sport.

“This year’s return is a golden opportunity to see of our Olympic and Paralympic superstars in action set against the spectacular backdrop of Horse Guards Parade Ground and The Mall in St James’s Park.”

London 2012 long jump champion Greg Rutherford was on hand to launch the event alongside his training partner Jermaine Olasan, who took the first ever long jump in Horse Guards Parade Ground. Rutherford, who has confirmed he will compete at the Sainsbury’s Anniversary Games will be joined by host of other Olympic, Paralympic and World Champions two years on from winning gold on ‘Super Saturday.’

Rutherford said: “It’s a great place to be and I think it’s going to be incredibly special to hold the Sainsbury’s Anniversary Games here. It’s one of the most iconic parts of London and you just have to look at the backdrop of Horse Guards to see the London Eye and just around the corner we’ve Queen sipping on her tea.

“I was so gutted to miss out on the Sainsbury’s Anniversary Games last year, so for me it’s a second bite of the cherry. By the time I come to compete, I will be in the best shape of the year and I’ll be looking to jump far here.

“Fans need to get on the British Athletics website, and get themselves in the ballot. There are 20,000 tickets and all we want is people excited about athletics cheering everyone on, in what will be a spectacular showcase of the sport.”

Mark Given, Sainsbury’s Head of Brand Communications said: “Sainsbury’s Anniversary Games is a once in a lifetime event, showcasing world class athletics on an iconic central London stage.

“People can register online or look out for our competition in store to be in with a chance to see Greg Rutherford, amongst other Olympic winners compete at Horse Guards Parade and The Mall.”

Penelope Boyd, Head of Events and Filming at The Royal Parks said: “Having played a significant role in the London 2012 Olympic and Paralympic Games where 11 Royal Parks hosted competitions from Triathlon to Equestrian and of course the Beach Volleyball, which took place on Horse Guards Parade Ground, it is fantastic to be part of the London legacy and we are looking forward to seeing Olympic and Paralympic medallists in action once again at one of our most iconic venues.”

The registration period to enter the ballot for the Sainsbury’s Anniversary Games will open at 9am on Tuesday 6 May via britishathletics.org.uk 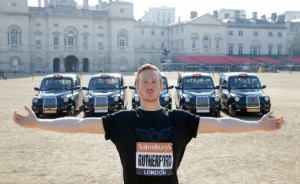