Edmonton, Alberta, 2014-5-9 — /EPR Retail News/ — If you drive far enough south on Wayne Gretzky Drive in Edmonton, you’ll come to Mill Woods, one of the city’s most culturally diverse communities. As you enter the area, you’ll see the North Central Co-op food store that opened today in the popular Mill Woods Town Centre.

Prasan and Saroj Dave are some of the first customers through the doors to see the new store. It comes as no surprise since the couple, who bought their first house in Mill Woods the year the mall opened 24 years ago, stop here for coffee every morning on their daily walk.

“We’re very impressed that it appears to be the only grocery store in Western Canada where there’s a cash back program,” said Prasan when asked about his initial impressions of the new store.

“You’ll have very good support from the community in Mill Woods, especially because of your customer service,” he said. “That’s something where other stores are falling behind, but I think it should come first.”

Store Manager Jeff Blaney said the Daves’ desire for service has been consistent among his customers.

“The biggest thing in the whole transition to Co-op is that customers were asking if the employees were staying with them,” said Blaney. “The employees are what make it happen here. When they found out they were all going to be part of Co-op, they were really excited be part of Co-op and that they would be able to keep serving customers in Mill Woods.”

With its focus on serving local customers and members, North Central Co-op is a natural fit for this community. Designed and built in the mid-1970s as a stand-alone town within Edmonton city limits, the area and its nearly 100,000 residents are known for having a strong sense of community.

“We’re all about being local,” said North Central Co-op General Manager Ed Berney. “It’s hard to imagine a better location for a community-focused business like Co-op than a neighbourhood like this one. People here really care about their community and the businesses that serve them.”

This is the seventh of 14 locations that will be turned into Co-op food stores this spring.

For more information on this store and other upcoming openings, visit www.myco-op.ca. 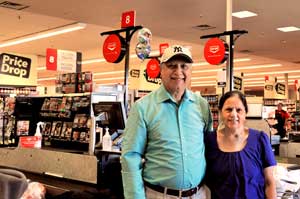