​ALEXANDRIA, VA, 2014-5-14 — /EPR Retail News/ — Rising gas prices during the annual spring transition to summer-blend fuels has finally driven down consumer optimism about the economy, which fell to its lowest level this year.

Overall, 41% of consumers say that they are optimistic about the economy, a drop from 44% the month prior, according the latest monthly NACS Consumer Fuels Survey that examines how gas prices affect consumer sentiment. Lingering poor weather across much of the country and a 14-cent-per-gallon increase in gas prices are among the factors that likely drove down consumer confidence.

“Higher gas prices usually mean tighter margins for fuel retailers as they compete for price-sensitive customers,” said NACS Vice President of Government Relations John Eichberger. “Combine that with reduced in-store sales that most retailers have faced because of bad weather and the first few months of the year have been rough for both consumers and retailers.”

Consumers’ also feel that their purchasing power at the pump is decreasing. Self-reported miles per dollar decreased again in May, dropping 5.7% to 6.32 miles per dollar, or 15 cents per mile on average. This mark is also at a low for 2014, another potentially worrisome indicator of overall consumer sentiment.

There are some positive signs as the summer-drive season approaches. Gas prices have trended downward over the past 10 days and warm weather is finally spreading across much of the country battered this winter.

The National Association of Convenience Stores (NACS) conducts a monthly nationwide survey in partnership with Penn, Schoen and Berland Associates LLC to measure consumer perceptions about gas prices and how they relate to broader economic conditions; 1,113 gas consumers were surveyed online May 6-7. The OPIS weekly national average price for gas was $3.681 on May 5, the week in which the survey was fielded. Summary results can be found at www.nacsonline.com/gasprices. 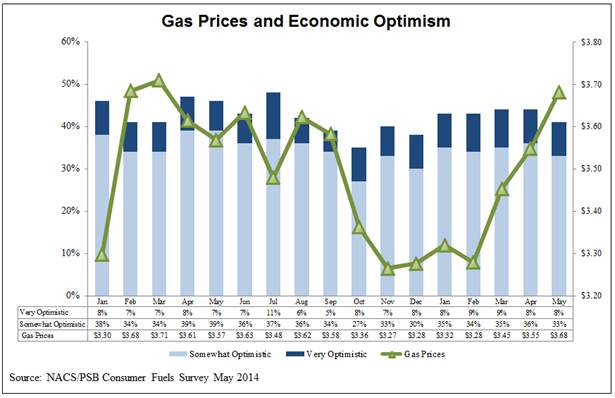