On a recurring basis, however, SM’s net income grew 11% from PHP5.61 billion. Underlying revenues also grew 12% from PHP53.71 billion. The consolidated net income in 2013 reflected exceptional trading gains in the Group’s banking businesses. These contributed to a surge in the earnings of a number of banks during that period, among them BDO Unibank. 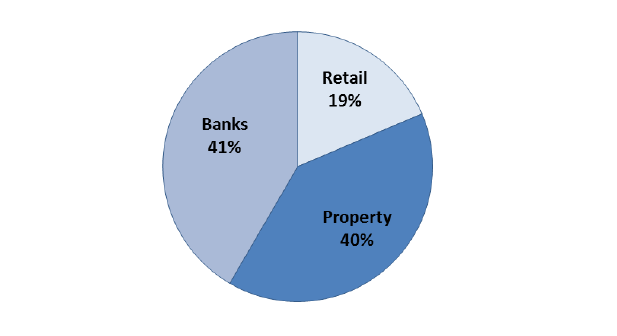 “We are pleased with our performance in the first quarter, having delivered double digit underlying top and bottomline growth. Retail started the year with strong revenue growth even as the intensifying competition puts pressure on margins. The newly formed Property Group has begun operating as a more cohesive integrated unit, and the banks continue to deliver strong profit growth. The environment will continue to be challenging, but we are focused on strengthening our core businesses to build our markets,” SM President Harley T. Sy said.

Net Income Profile Banks continued to account for the largest share of SM’s consolidated net income, contributing 41% of the total. The property business accounted for 40% while retail contributed 19%. 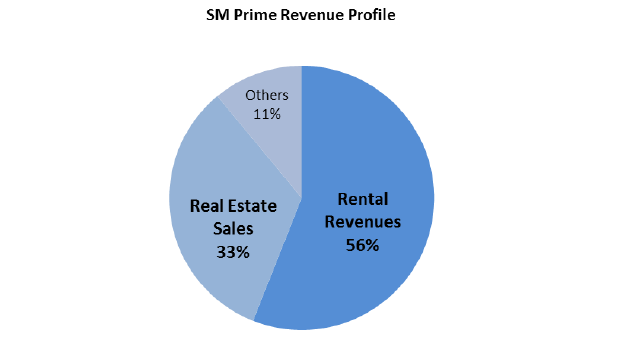 Rental revenues accounted for 56% of the consolidated revenues, and grew by 12% to PHP 8.56 billion in 2014 from PHP 7.63 billion same period in 2013. The increase in rental revenue was primarily due to the new malls opened in 2012 and 2013, namely, SM City Olongapo, SM City Consolacion, SM City San Fernando, SM City General Santos, SM Lanang Premier, SM Aura Premier and SM City BF Parañaque, with a total gross floor area of 818,000 square meters. Excluding the new malls and expansions, same-store rental growth was at 7%.

Real estate sales contributed 33% to total revenues at PHP5.02 billion in the first quarter of 2014. Volatility in real estate is reflective of normal cycles, and driven by the number of projects that come on stream. There were two project launches in 2012 of about 4,600 units from Breeze and Grace Residences compared with the nine project launches in 2010 and 2011 of about 26,700 units mainly from Jazz, Light, Wind, Shell and Green Residences. On the average, it takes about two years before revenues are recognized due to percentage of completion accounting. Noteworthy is the growth in gross profit margin for residential by 42% in 2014 compared with 39% in 2013.

In 2014, SM Prime will open SM City Cauayan, its first mall in the Cagayan Valley region, particularly in Isabela, one of the most progressive provinces in the region. SM City Cauayan has a GFA of 94,386 sqm.

It will also open SM Center Angono in Rizal with a gross floor area of 33,094 sqm which will rise in the art capital of the Philippines. SM Prime is also set to expand SM Bacolod and SM Lipa after expanding SM Megamall with the launch of SM Mega Fashion Hall in 2014. The expansion of SM Megamall transformed it as the country’s largest mall in the country with a total GFA of 506,435 sqm.

In China, SM will open SM City Zibo in the heart of Shandong province. SM City Zibo will have an estimated GFA of 154,000 sqm.

For the residential business, SM Prime will be launching an additional 15,000 units this year from expansion and new projects. In terms of offices, SM Prime has topped off the third E-com building. It will also break ground on another E-com building in the third quarter.

Under its hotels and convention center business, the company is slated to open SMX Convention Center in Bacolod third quarter of this year while Park Inn Clark is expected to be open in the last quarter of 2015.

Banking
BDO Unibank, Inc. recorded a net income of PHP 5.5 billion compared with P10.0 billion in the first quarter of 2013 which reflected exceptional trading gains. The bank revenues and net income are accounted for under the equity method of accounting in SMIC’s consolidated financial statements.

The bank’s core businesses, particularly in loans and low cost deposits posted solid gains. Net interest income in the first quarter grew 27% year-on-year and continued to be the main earnings driver at PHP 12.2 billion. This is primarily due to the bank’s thriving customer loan business which expanded 23% to PHP956 billion, supported by a 37% growth in its low cost deposits.

Fee based income from payments, transaction banking, and asset management services also expanded 16% year-on-year, leading to an income contribution of PHP 3.9 billion. Treasury related activities contributed PHP 2.2 billion in earnings. BDO will focus on its core lending and deposit-taking operations as well as its service businesses to drive earnings in 2014. In terms of branch expansion, around 50 branches are scheduled for rollout in 2014.

The ASEAN Integration in 2015 is expected to open up more cross-border businesses for local banks as well as expand client base and market coverage. In BDO’s case, the bank will continue to strengthen and build its domestic presence.

Retail Operations
For the first three months of 2014, SM Retail sales grew 16 % to PHP 42.2 billion amidst greater competition. SM Retail reported a net income of PHP1.2 billion, for a net margin of 3% while EBIT rose 6% to PHP1.8 billion.

For 2014, The SM Store will put up new stores in Cauayan, Isabela and SM MegaCenter in Cabanatuan, Nueva Ecija. After rebranding the department store to “The SM Store”, SM Retail plans to roll out new store designs and layouts to accommodate more brands and deliver an enhanced shopping experience on the back of an emerging generation of higher spending, fashion conscious Filipinos.

The Food Retail Group on the other hand continues to be optimistic about 2014 as it plans to introduce more stand-alone stores and through the help of SM’s partnership with Double Dragon’s CityMall Commercial Center, Inc. in order to satisfy the needs of the market.

SM Balance Sheet The total assets of SM grew 10% in the first quarter to PHP 629.05 billion. As of end-March 2014, SM maintains a very healthy balance sheet with a gearing ratio of only 38% net debt to 62% equity. SM recently raised PHP15 billion from a public offer of peso-denominated retail bonds with maturity of seven and ten years. The SM bonds are rated PRS Aaa by Philippine Rating Services Corporation, the highest rating assigned the credit rating firm. 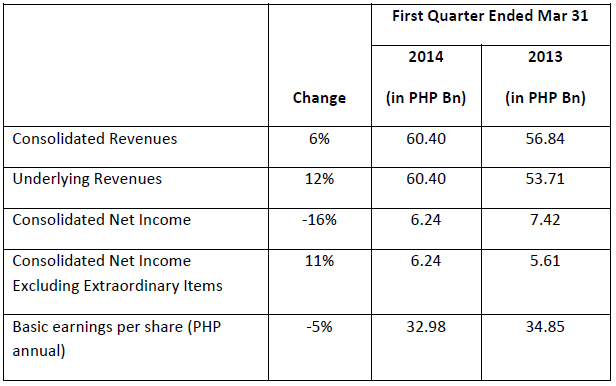