SEATTLE, 2014-12-10 — /EPR Retail News/ — With his car in the shop for the day, Larry stopped by a Starbucks in Chicago’s Willis Tower to grab something for the train ride home. “That was a good move,” he said.

Mary often arrives at work in Portland, Oregon with a Starbucks beverage in her hand. “My Starbucks barista Andre gets my day started right, and now I’ll be seeing him every day in the drive-thru.”

Larry Kajmowicz and Mary Braun are the first two winners of Starbucks for Life. Braun was notified of her grand prize tonight (December 9) on NBC’s “The Voice” tonight.

Talking with Daly was an additional surprise for the first major prize winner of Starbucks® It’s a Wonderful Card Ultimate Giveaway*.

Customers who pay using a Starbucks Card or their Starbucks® mobile app receive a code at the bottom of their receipt. After entering the code online, customers find out if they’ve won one of the 482,000 instant prizes and are entered to win the ultimate prize of Starbucks for Life, which is one free food or beverage item from participating stores every day for the next 30 years. The grand prizes have an estimated value of $54,000.

“I freaked out. Are you kidding me? I totally freaked out when I heard I’d won,” Braun said. “I still can’t believe it.”

Most mornings Braun swings in to her favorite Starbucks drive-thru. During the holiday season, her handcrafted beverage of choice is a “Grande no whip peppermint mocha,” she said. Other times of the year she’s a “dark roast fan.”

Braun is also a fan of “The Voice,” where she first saw a commercial for the Starbucks contest. She started playing last week, entered a code and was “shocked” to find she was a finalist.

When Braun told her co-workers at New Seasons Market, a locally-owned chain of grocery stores, they were “cheering for me,” she said. Now that she’s won, they’re hinting they’d love to join her for a coffee date. Braun also plans to share her rare prize.

“Some days I’ll buy a breakfast sandwich and give it to a homeless person. Other days I’ll buy coffee or a treat for the person behind me in line,” she said. “Starbucks makes my day, and I’m going to do the same for others.”

Larry Kajmowicz is a loyal Starbucks customer, though he admits he’s not a coffee drinker.

“I do love tea. I drink a Trenta unsweetened iced green tea almost every day,” he said. “Now I’ll definitely drink one every day.”

Kajmowicz didn’t know about Starbucks® It’s a Wonderful Card Ultimate Giveaway until a barista pointed out the code at the bottom of his receipt and suggested he “check it out.” Kajmowicz, an equities trader who commutes from a Chicago suburb to the downtown area, took the train last week because his car was in the shop. While waiting for the train, he entered the code and discovered he was eligible to win the grand prize, and later was notified of his Starbucks for Life prize on “The Voice.”

“My wife and my mother in law are jealous because they frequent Starbucks as often as I do,” he said. “This is unbelievable.”

The Starbucks for Life prize comes with a piece of Starbucks history for Larry, Mary and the other winners to come. Each will receive the most exclusive Starbucks Card ever made. With an estimated retail value of $5,000, the card is made of 10K hammered gold, and will be engraved with the winner’s name. 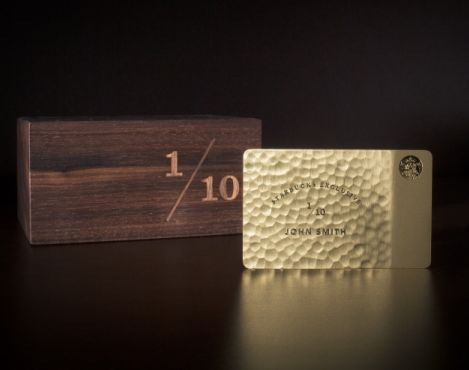