SEATTLE, 2015-6-22 — /EPR Retail News/ — In the days following the shooting that took the lives of nine people in a historic Charleston, South Carolina church, a former Starbucks partner wishes he could have had one more big family gathering with his sister.

“She was the most kind-hearted person. She called often to remind me that we should get the whole family together soon. Things would come up and we put it off,” said JA Moore, fighting back tears. After a long pause, he added, “She’s bringing us together now. For a funeral.”

Moore’s half-sister, Myra Thompson, was leading a small Bible study group gathered at Emanuel African Methodist Episcopal (AME) Church Wednesday night. In addition to familiar faces, was the 21-year-old man now charged with nine counts of murder for the shooting death of Thompson and eight others at the church in the heart of Charleston.

“Myra was more like a second mom to me than a sister because at 62 she was almost double my age, but she was the most loving woman I know and a pillar in the community,” Moore said. “I’m still stunned, but being with other partners today (6/19) is helping me deal with the loss.”

Moore was among 75 Starbucks partners (employees) who met with company chairman and ceo Howard Schultz. After sending a letter to all partners Thursday calling the tragedy a “senseless hate crime that has impacted not only that community, but our Starbucks family and our nation as a whole,” Schultz flew to Charleston on Friday to meet with local baristas and managers. Starbucks has about 200 partners in 18 stores in the city and surrounding area.

In addition to meeting with partners in three stores and listening to their stories during a partner forum, Schultz pledged that the Starbucks Foundation will donate $100,000 to two funds in the community. A $50,000 contribution will be made to the “Mother Emanuel Hope Fund,” established by the City of Charleston to help family members of the shooting victims pay for funerals, counseling and other needs. The other $50,000 will be directed to Lowcountry Ministries – Reverend Pinckney Fund to be used to support vulnerable populations and youth projects that Reverend Clementa Pinckney was passionate about.

“You can tell people are numb following the shooting. They come in to our stores because they’re looking for a sense of normalcy,” said barista Dylan. “We often talk about the ‘third place’ that Starbucks has become for our customers. It’s not home, it’s not work, it’s the other place you feel comfortable, and in times like this we’re glad to be there for people.”

Chad Romines, assistant store manager of a North Charleston Starbucks, said though the community is grieving it is also calm. “This is a big small town, and people have a lot of concern and love for one another. We are united.”

Evidence of the calm, respectful and even forgiving presence in Charleston was evident Friday outside Emanuel AME Church. Hundreds of people filed by, many added flower bouquets and notes in front of the building with a tall spire that reaches toward the sky. Some notes read: “I love you grandma” and “To the killer, we have mercy on your soul.”

After speaking about race with partners for about an hour-and-a-half, as he’s done in a dozen other Partner Open Forums across the country, Schultz concluded, “I’m deeply sorry on behalf of our entire company for all that you are going through. Living in this beautiful, historic city it’s tragic this could happen. Please take care of one another, and know that together, we will not be bystanders.” 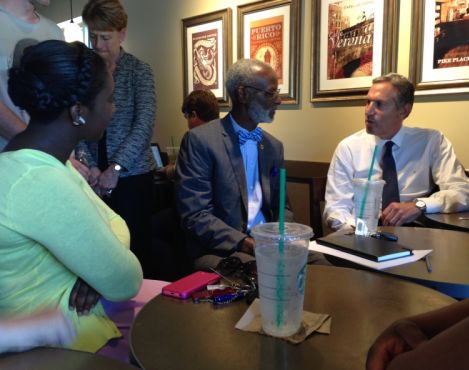