SEATTLE, 2015-8-28— /EPR Retail News/ — A decade ago Hurricane Katrina made landfall along the Gulf Coast, leading to one of the most catastrophic natural disasters in U.S. history. This weekend, as residents of New Orleans mark the 10th anniversary, many Starbucks partners (employees) will participate in a Citywide Day of Service to continue giving back to the historical city.

In a personal essay below, Starbucks regional director Jennifer Hicks recalls the day Katrina made landfall, and she shares how Starbucks partners and customers have rebuilt their lives since that time in 2005.

At the time Katrina hit, I was a district manager with stores in Baton Rouge, Lafayette and Lake Charles, Louisiana.

I didn’t think it was going to be much of a storm. Two fellow district managers, who lived in New Orleans, evacuated to my house. We had dinner and tracked our partners to make sure they were safe. We treated it like a regular hurricane.

The next morning, we brewed coffee and delivered it to local Red Cross shelters. Around 10 a.m., we started hearing reports that the levees had failed and at that moment we looked at each other and knew that this was going to turn into something very, very different.

Every Starbucks store in New Orleans closed. One of my stores in Gonzales, Louisiana, which is about 20 minutes outside Baton Rouge, became the last store open on the way to New Orleans. All Starbucks locations in Baton Rouge tripled in volume because we were the only stores open in the area.

I remember that we were adamant about finding every partner. We had hired a young man to be a barista the Friday before Katrina and we told him we were going to close for the hurricane and he could start the next day. It took nearly four weeks to locate him because he had evacuated to Atlanta. Because he had not worked yet, he was surprised that we were still looking for him, but we told him, “You have a partner number, you’re a partner, so we just want to make sure you’re okay.”

New Orleans stores stayed closed for quite a while and they were difficult to re-open because partners didn’t have places to live. It was slow going to get stores back up and running.

‘We’re so happy to see you’

When we finally began reopening stores, we wanted to be sensitive about how we spoke with our customers. In the past, we could greet them with, “How are you doing today?” We quickly adjusted our language to, “We’re so happy to see you.” We understood how customers were feeling as they returned to the city and started working to rebuild their homes. I remember a partner who brought a regular customer to tears by asking, “Do you still drink Caramel Macchiato?” Being back in their store, being able to seetheir barista, and simply being acknowledged was powerful.

I am always amazed at how many partners found their way back to Starbucks stores in New Orleans after Katrina and have been there ever since. We have partners who were incredibly grateful for monetary resources from Starbucks CUP Fund. We even have partners who joined the company while they were displaced and then transferred to New Orleans. They tell some pretty compelling stories about what it means to be a partner in New Orleans. There’s a certain level of gratitude and knowledge that working for Starbucks is more than just a job. Some criticized us for not reopening stores faster, but we wanted to be respectful of our partners and the stress they were under after the storm.

Three years after Katrina, Starbucks held its Global Leadership Conference in New Orleans and community service was a main focus. More than 10,000 store managers planted trees and built parks and playgrounds. Through the Greater New Orleans Foundation, we found smaller nonprofits that really needed our help and we maintain many of these relationships to this day.

‘Still more work to do’

Saturday is the anniversary of Katrina and I’m participating in community service with a team of Starbucks partners. We are working with an organization called the NORD foundation to rebuild a playground and park. It’s a challenging day for many partners who just want to be at home with family and friends. There are also many partners who are doing service with church groups and other organizations. There are so many people coming out in support of the city.

Today we’ve reopened all but two Starbucks stores in New Orleans (that were damaged beyond repair) and have added many more in the city. One of my favorites is on Canal Street and St. Charles. The back half of the store is meant to evoke that of a shop keeper where you display pictures of your family. I talked with the designer, David Daniels, and said if we were going to put up pictures of our family, then we had to share those of our partners volunteering during the Global Leadership Conference. The back part of that store is sort of my ode to our partners, with beautiful pictures of them painting and planting trees.

New Orleans has made a lot of progress, but there are still places that have gone unchanged. If you go where tourists typically go, you won’t see areas that haven’t recovered unless you go looking for them. I’m sad to say that there are neighborhoods where residents didn’t have the insurance to rebuild their homes. Katrina brought to light many issues that are now being addressed. There is still more work to do, but the spirit and essence of New Orleans is alive and well. 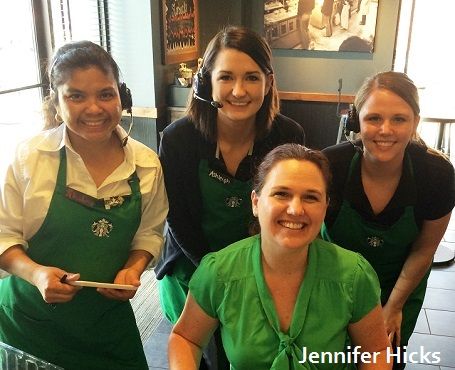