After ordering a beverage at a Texas Starbucks® store when Parry was 17 years old, the manager asked if she’d be interested in working for the company. The store manager heard the way Parry communicated with her barista and thought she would be an ideal candidate to interact with Starbucks customers.

“I submitted an application the next day. Shortly after interviewing, I was offered the job,” she said. “I’ve been a partner for the past four years and I’ve loved every minute working here.”

A flexible work schedule has allowed Parry to pursue another career serving her country. She joined the U.S. Air Force Reserves in 2013 and is currently an F-16 fighter jet mechanic.

“I had always wanted to join the military. By joining the Air Force Reserves, I could continue working for Starbucks and receive a paid education as well,” she said.

Parry’s aunt, uncle and several cousins all served in the Armed Forces and their stories of service made an impression on her. Although she felt a great sense of patriotism, she was also deeply impacted when one of her cousins died while serving as part of Operation Iraqi Freedom.

“My cousin’s death made military service and sacrifice very real for me,” said Parry. “Ironically, it fueled my desire to serve. Dying was not what I feared the most. Instead it was not following my dreams and allowing something to hold me back.”

Parry qualified for several jobs in the Air Force Reserves including a medical position, which was ideal because she wanted to become a nurse. Surprisingly, she decided to take a different turn.

“My military recruiter suggested that I train to be an F-16 fighter jet mechanic,” said Parry. “He thought I would be really good at the job and since I like to be a ‘jack of all trades,’ I pursued it.”

As a jet mechanic, Parry is up early in the morning to inspect and clean aircraft. She conducts systems and flight control checks before pilots fly and refuels the jets when they land.

“I remove engines, repair fuel leaks and replace tires,” said Parry. “If something is broken, I fix it.”

While training to be a jet mechanic, Parry met her husband, Santino. They married in November of 2014 and moved to California where Santino is stationed. Parry then landed a job at a local Starbucks Military Family Store.

“Transferring from my store in Texas to one in California was easy,” said Parry. “Starbucks is very supportive of military partners.”

Parry heads to Texas for a week every three months in the reserves. She is also taking classes at a local community college and will apply to nursing school in the fall.

“Starbucks and the Air Force have prepared me for life,” said Parry. “Both have taught me to have integrity, put service before self and strive for excellence in all that I do.” 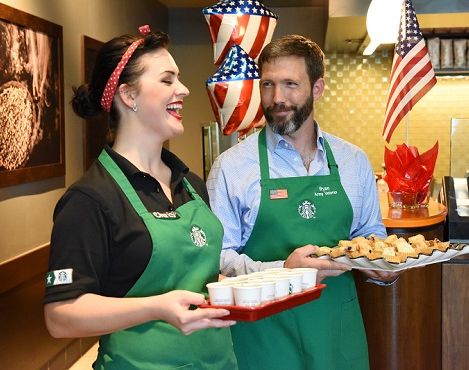 Starbucks: Chris Parry, the Barista that is also an F-16 fighter jet mechanic