SEATTLE, 2015-10-9 — /EPR Retail News/ — At any given time in the past decade, less than 1 percent of the American population has been on active military duty. As a result, many who served in the Armed Forces recently feel like the general public doesn’t understand their sacrifice.

“I don’t think we’ve ever lived through a situation where the American people have been so disconnected from the military, their families and the unbelievable sacrifice they have pursued on our behalf. The question for all of us now is how do we bridge the divide between the military and civilians? That is the challenge of the day,” said Howard Schultz, Starbucks chairman and ceo. He addressed more than 200 people representing veterans service organizations, all branches of the Armed Forces and leaders from other companies at Starbucks headquarters in Seattle today (October 8, 2015).

Starbucks brought participants together for a day-long conference called The Muster — an Old English military term for the process of accounting for members of a unit, generally after a battle — to create a collective blueprint to help with the transition from military service to civilian careers.

The effort is a continuation of Starbucks commitment, announced two years ago, to hire 10,000 veterans and military spouses by the end of 2018. While building a pipeline of talent focused on veterans and active duty spouses, the company realized it can do more to bridge the divide between military and civilian populations.

Former Defense Secretary Robert M. Gates said the “divide” is not an indication of animosity toward veterans and those who serve. In fact, the U.S. military ranked as the highest-rated institution in a 2015 Gallup survey, with 72 percent of Americans expressing “a great deal” or “quite a lot” of confidence in the institution. That compares with an 8 percent confidence rating for Congress.

“The problem for the military today is simple indifference,” said Gates, who served as U.S. Secretary of Defense from 2006 to 2011. Currently, he’s president of the Boy Scouts of America and a Starbucks board member.

Gates called on companies, veterans service organizations, nonprofits and the military to unite their efforts toward the goal of redefining the post 9/11 veteran experience.

“At the heart of the all-volunteer force is a contract between the United States of America and those who serve,” said Gates. “It’s a promise that when young Americans step forward on their own to serve, they do so with an expectation that their country will do right by them when their deployment is done. That includes easing the transition from battlefield to homefront, from homefront to workplace and if we get this right, to a number of executive suites as well.”

Throughout the event in Seattle, guest speakers noted that military men and women and their spouses are not looking for sympathy or handouts.

“Veterans don’t stop serving when they take off their uniforms. They just serve in a different capacity,” said Army Lt. Gen. Stephen Lanza, commander of I Corps and Joint Base Lewis-McChord. “They’re not looking for a soft landing; they’re looking for your support for a smooth takeoff.”

Hiring veterans is not a charitable act, he added. It is a business imperative.

“Veterans have all the attributes you want in an employee. They are committed to something greater than themselves. They understand diversity. They are able to accomplish a mission under the hardest of conditions. They are leaders,” said Lt. Gen. Lanza.

On Veterans Day, Starbucks will provide an update on progress being made hiring veterans, active-duty reservists and military spouses.

A pledge from Starbucks to hire, honor and strengthen veteran communities has produced several initiatives, including over the past two years: patriotic green aprons to spark conversations between veterans or military spouses and customers; Starbucks Military Family Stores, run primarily by veterans and military spouses; Armed Forces Network expansions to a include Starbucks partners (employees) in dozen of cities around the U.S.; and Military Mondays, a program in a Starbucks store where William & Mary law students and professors offer their expertise to resolve veterans’ disability-compensation challenges. Read more here: Paying Tribute and Creating Opportunity. 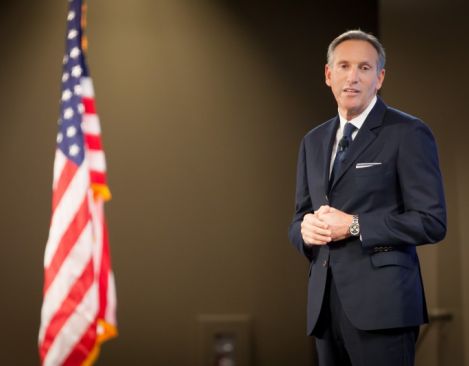