SEATTLE, 2015-10-15 — /EPR Retail News/ — As the number of partners (employees) moving through the Starbucks College Achievement Plan continues to climb, some trends are becoming apparent.

Launched in June 2014, the Starbucks College Achievement Plan provides an opportunity for all U.S. partners working an average of 20 hours per week to earn a bachelor’s degree from Arizona State University online campus with full tuition reimbursement. It’s produced a dozen online graduates, with more than 200 grads expected by May 2016.

The total number of Starbucks enrollees just passed the 4,000 mark and is expected to reach 4,800 by the end of the year, according to Leah Lommel, assistant vice president of EdPlus at ASU and chief operating officer at ASU Online.

Starbucks students are generally younger than other online students, averaging 26 years of age. They come from every state in the nation with California, Washington, Texas and Arizona leading the way. Of the more than 50 undergraduate degrees offered, the most popular areas of study for Starbucks scholars are: psychology; organizational leadership; health sciences (healthy lifestyles coaching);  and business communications. Lommel said Starbucks College Achievement Plan students are more inclined to stick with the program, retaining at nearly a five percent higher rate than ASU’s core student body.

“When you take the pressures of finance off and build a support network around this group, it helps give them motivation to stay,” she said.

Finances were certainly a major factor in Ryan Wheatley’s decision to pursue a degree through the Starbucks College Achievement Plan. A 23-year-old Wheaton, Illinois, native, his college dreams hit a roadblock after he received an associate’s degree earlier this year. Wheatley hoped to enroll in a four-year university in Chicago, but was forced to abandon that plan when he was unable to secure sufficient financial aid.

“I was contemplating holding off – just working and waiting for my bachelor’s,” Wheatley said. “I think, had that happened, I would have had a hard time going back. As we all know, life happens. I think it would have been hard for me to find the time, because there’s no right time.”

Around the time his Chicago plans were stymied, Wheatley learned about the Starbucks College Achievement Plan. Approaching the offer with some skepticism, he was won over as he dug deeper.

“As I researched it more, it hit me: This is perfect. This is my match. This has been waiting for me this whole time.”

Today the four-year Starbucks partner is pursuing a mass communications/media studies major through ASU Online and hopes to graduate in 2017.

As with Wheatley, the Starbucks College Achievement Plan came at the right time for Julia Brooks. A 23-year-old barista based in Fountain Valley, California, Brooks had accumulated credits from both a community college and a four-year institution, but was finding it difficult to balance work and studies.

“Trying to do both was kind of a nightmare,” she recalled. “When the Starbucks College Achievement Plan was announced it was like I could hear angels singing. It enabled me to take charge of my life and be able to plan my own days and my own weeks.”

Brooks is one of the pioneering graduates in the program, earning her bachelor’s degree in communications last summer. The three-and-a-half-year partner has become an advocate for the plan, having already convinced four partners to apply at ASU.

“Having someone that they know who has done it and had success helps them see it as a real opportunity for them,” said Brooks.

Adrienne Gemperle, Starbucks senior vice president of partner resources, said “word of mouth” from students like Wheatley and Brooks will go a long way toward helping hit a target of 25,000 Starbucks graduates by 2025.

“We have more than 100,000 partners in the U.S.,” Gemperle said. “When students can hear from one another about best practices – what makes it easier to be successful; how they’re navigating work/life balance – that’s really helpful.”

Gemperle said she’d like to see 100 percent awareness of the program among Starbucks partners to lay the groundwork for what can be a life-changing outcome. It’s not a simple decision, she acknowledged, but if they’re interested, the next step is to provide the support needed to get them on the path to graduation.

ASU’s Lommel concurs, calling the Starbucks College Achievement Plan a “long-term effort” for the university, Starbucks and scholars. “We are seeing that it takes people six to 12 months to decide to go back to school,” Lommel said. “First you have to get that interest and then you have to give them that support to believe that they can be successful before they make that leap.” 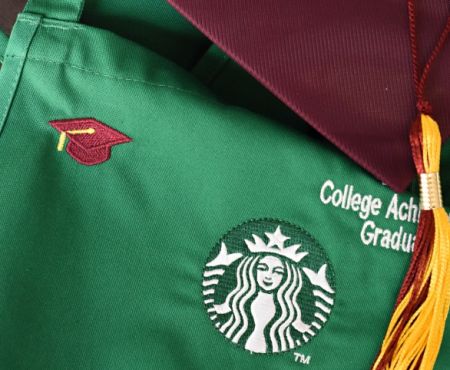 Starbucks College Achievement Plan: enrollees just passed the 4,000 mark and is expected to reach 4,800 by the end of the year