SEATTLE, 2015-10-23 — /EPR Retail News/ — Scarves for soccer fans are what hats are to baseball lovers – a show of fan unity and solidarity with a favorite team.  Anyone going to a Sounders FC match knows the phrase “scarves up” as a rallying cry, but this week the Seattle soccer team is encouraging fans to do something more meaningful with scarves.

The Sounders, along with Starbucks, are collecting fan donations of scarves and winter clothing for YouthCare. The nonprofit organization provides a continuum of care for homeless youth.

The week-long Scarf Drive is underway and will be capped October 25 at CenturyLink Field when the Sounders FC face off against Real Salt Lake. Earlier in the week, Starbucks presented free tickets to the match to Scarf Drive donors at the Starbucks store in University Village, where Sounders FC striker Nelson Valdez signed autographs and posed for photos, and $5 Starbucks gift cards were presented to the first 90 contributors at the Greenwood Fred Meyer.

Donation bins will be located outside each entrance at CenturyLink Field from 2:30-4 p.m. and at The Ninety (406 Occidental Avenue S.) from 2-4 p.m. on October 25.  Starbucks will also donate $1 to YouthCare for every item of clothing collected in the drive, up to $15,000, which is the goal for this year.

Roger Levesque, a popular Sounder alumni who retired in 2012 and now serves as the team’s director of community outreach, said the move of team offices from suburban Renton to Pioneer Square in Seattle a year and a half ago puts the problem of homelessness front and center for the organization.

“It’s something we see every single day,” Levesque said. “There are great organizations, like YouthCare, doing positive things to move the needle with homelessness. It’s something that, by being good neighbors, we can make a difference.”

Jody Waits, director of development and communications at YouthCare, said Starbucks is helping to raise the local profile of the event and her organization’s efforts. That along with the clothing and cash donation will help provide comfort to homeless youth over the harsh Northwest winter months ahead.

“There are early indicators that our long summer is going to produce a tough winter season,” said Waits. “We will distribute all of our socks, gloves, hats, scarves and jackets by the end of January unless we’re able to stock up through the fall and holidays.”

Starbucks is also collecting clothing at its Seattle headquarters and volunteers from the company will be at the October 25 Sounders FC match to help collect items and tally the final count, which will be announced to the full-stadium crowd with over 53,000 expected at CenturyLink. 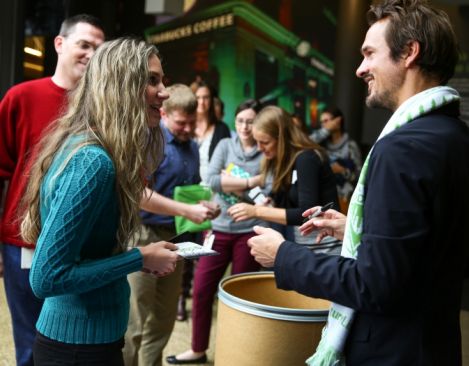