SM Center Sangandaan, strategically located  along the busy intersection of Samson Road and A. Mabini Street Sangandaan, Caloocan City, will give SM Prime access to the northern tip of Metro Manila, bringing a unique shopping experience closer to the highly dense cities of Malabon, Navotas and Caloocan.

“SM Center Sangandaan reflects SM Prime’s commitment to be part of the growth across communities. We are very pleased to open our first mall in Caloocan City which is a testament to the fact that Metro Manila is far from being saturated by modern retail facilities,” SM Prime President Hans T. Sy said.

The mall opens its doors to more than one and a half million Filipinos with 90% of the space lease awarded to various tenants. SM Center Sangandaan will have anchor tenants such as SM Supermarket, SM Appliance Center, SM Cinema, Ace Hardware, BDO, and Watsons.

There will be a total of three levels of prime spaces which includes four cinema theaters with a total seating capacity of 824 and 493 parking slots.The mall’s facade gets its inspiration from different shades of blue, gray and white, giving the exterior a quirky geometric visual design. The main interior features a high glass ceiling, complemented by white walls which maximizes daylight and adds futher dimension to the mall. SM Center Sangandaan was delicately planned around a simple yet efficient design that allows shoppers to easily stroll around and provides clear line-of-sight to all shops on all levels at the same time.

To date, SM Center Sangandaan is the fifth SM mall to be opened this year, after Cherry SM in Shaw Boulevard with a GFA of 24,165 sqm and SM City Cabanatuan. These malls recently opened last October 13 and October 9, respectively. The highly anticipated, SM Seaside City Cebu, is scheduled to open on November 27, 2015.

SM Prime remains committed to its role as a catalyst for economic growth, delivering innovative and sustainable lifestyle cities, thereby enriching the quality of life of millions of people. 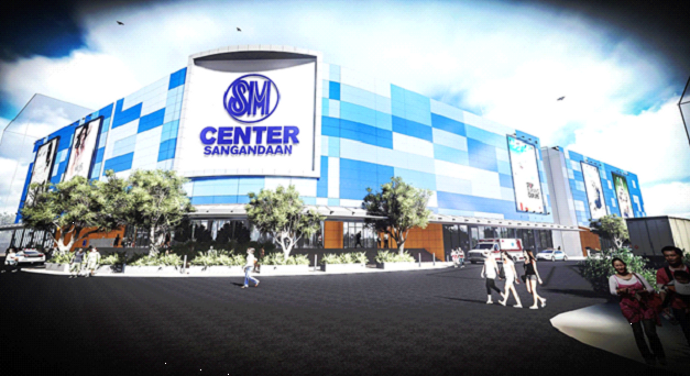