Salt Lake City, Utah, 2015-10-29 — /EPR Retail News/ — While more retailers are turning to online and digital shopping, Associated Food Stores is giving shoppers another reason to visit the grocery store; Free money. The grocery wholesaler announced the launch of Shopper Radar, a new mobile app, which gives users access to store credits, special offers and digital coupons when they use the app at any of its participating retailers. The app is available for free in the Apple App Store and an Android version will be available soon.

Shopper Radar uses Bluetooth beacons to send alerts to shopper’s smart phones while they walk around the store. To receive the store credit or coupon, shoppers simply tap their screen to signal they have seen the offer. Once they tap the screen, they are rewarded with a store credit and digital coupon for that product. In order to keep the credits, shoppers must make a purchase before they leave the store. They can use the credits toward the sales total or save them for even greater savings later. Each digital coupon earned through the beacons can only be used the day they are earned. Shoppers can also clip additional digital coupons with the app. Credits and coupons vary in amount and must be used before the listed expiration date. Associated Food Stores’ retailers are the first in the country to partner with Shopper Radar to bring additional savings and store credit to shoppers.

The app is designed to engage shoppers during key purchase decision making times by providing offers directly to their smart phones. Users can earn up to four different wallet credits each day by visiting their local participating AFS retailer.

“We wanted a way to provide shoppers with great savings, coupons and other deals while they are in the store and making those decision,” said Heather Hall, AFS’ Rewards Marketing Manager. “Shopper Radar is great because it also integrates with each participating store’s customer rewards program, making it easy for shoppers and the store to manage.” 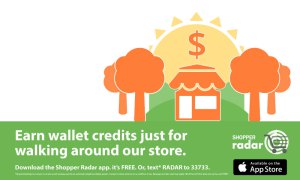