MANCHESTER, England, 2016-Mar-09 — /EPR Retail News/ — A Denbigh-based dairy is on course to boost production and create new jobs at its Tal y Bryn farm following a contract coup with the Co-op.

Llaeth Y Llan / Village Dairy – which marked its 30th anniversary of making artisan yoghurts at the Roberts family farm last year- is set to double its workforce over the next 24 months and expects to recruit its 50th employee this year after creating new production and product development roles.

Established to diversify the farm’s dairy business in the 1980’s, the yogurts were originally sold through local milk rounds and, local independent stores. The Co-op was the first major retailer to stock Llaeth Y Llan / Village Dairy’s yogurts and, with over 160 Co-op stores across Wales, the new contract is now the Dairy’s largest contract with a convenience retailer.

“We didn’t think that the yogurt made in our farmhouse kitchen would one day be available across the country. The farmhouse remains at the heart of the business and we are still old-fashioned yogurt makers however, our new production plant in our farm outbuildings is capable of trebling production.

“Our team are great, they help us to create and deliver a product that we are all really proud of and a contract on this scale with the Co-op is great news in so many different ways. As a community retailer it opens up new markets for us while providing a boost for local rural jobs.”

Matthew Speight, Managing Director for The Co-op in Wales, said:

“As a retailer with a history stretching back over 150 years the Co-op is committed to supporting local communities, it is investing to transform and grow its convenience business and to enhance the in store experience for customers, offering home-grown products is an important part of this approach and also supports local economies and provides a boost for jobs – Industry data shows that our strategy is taking us in the right direction as we take strides towards our ambition of being the number one community retailer.

“Llaeth Y Llan / Village Dairy is an inspirational story of endeavour and success in Wales and we are delighted to be working closely with the team at the Dairy  and further build our close ties – our stores are located in the heart of Welsh communities and this is a further step in the Co-op’s commitment to offering more locally sourced produce conveniently.”

Consumer shopping habits are changing, shoppers are increasingly buying what they want when they need it, conveniently. The Co-op is the fastest growing non-discounter food store according to retail data released by Kantar Worldpanel (9 February) – the community retailer has grown its Loved by us and Truly Irresistible own-label sales by 7%, with sales of fresh and chilled produce growing fastest. As consumers increasingly shop little, often and conveniently, The Co-op is also confirmed as the most frequently visited major supermarket. 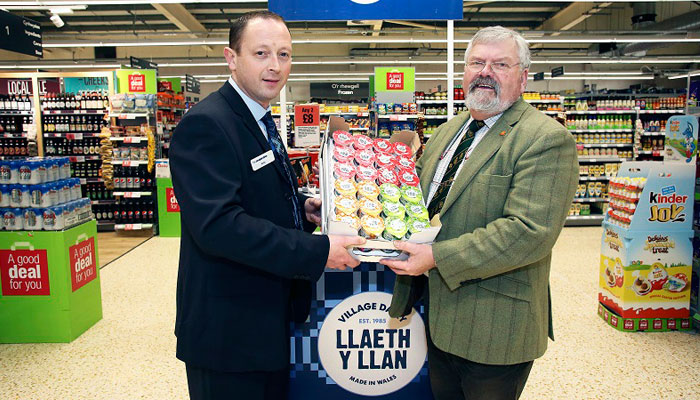