Dombroski recently moved to the Vancouver area with his wife, Aubrey, and three young children to open the franchise. A graduate of the United States Air Force Academy, Dombroski originally had dreams of becoming a pilot but found his way to Chick-fil-A after an eye condition prevented him from completing pilot training.  Beginning as an hourly Chick-fil-A team member in Pensacola, Fla., it took him less than five years to work his way up to owning his own restaurant.

“We feel completely at home here,” Dombroski says.  “Aubrey and I are beyond excited for the opportunity to open our own Chick-fil-A restaurant in such a beautiful place with a terrific community. We look forward to introducing Chick-fil-A to Vancouver and to serving our customers great food with remarkable hospitality.”

The restaurant, formally named Chick-fil-A at Cascade Park, will be located at 719 SE 164th Avenue and is the third of three locally owned Chick-fil-A restaurants to open in the Portland area this year. Chick-fil-A, which earned a top spot in the 2015 Customer Service Hall of Fame, is known for its menu of fresh, hand-crafted food and offers a variety of options for guests of all ages. Signature items include a hand-breaded, boneless chicken breast sandwich, Waffle Potato Fries and hand-spun milkshakes. The restaurant uses only premium ingredients and makes many of its menu items from scratch in the restaurant each day, including hand-chopped salads and fresh-squeezed lemonade.

Chick-fil-A at Cascade Park will partner with regional farmers and suppliers to source as many locally- and regionally-grown ingredients as possible. In fact, the restaurant will source all of its bread from Portland-based Franz Bakery, which also supplies bread to Chick-fil-A restaurants in Washington. Chick-fil-A sources all potatoes used to make hash browns and Waffle Potato Fries from the Columbia River Basin – buying more than 438 million pounds of potatoes last year alone. Additionally, all of the apples used to supply Chick-fil-A’s West Region restaurants are grown in the Pacific Northwest, sourcing more than 2.25 million pounds of apples from the region each year. Chick-fil-A is also collaborating with national and regional poultry suppliers to ensure it serves chicken raised without antibiotics in all its restaurants nationwide by 2019. Among other locally-based giving initiatives, Dombroski will partner with a local food bank to donate surplus food to those in need multiple times a week.

Chick-fil-A at Cascade Park will create approximately 100 new full-and part-time jobs, with team member hiring taking place now. Chick-fil-A is known for developing and retaining young talent, offering a supportive workplace with opportunities for leadership development, promotions that lead to management roles, the opportunity to earn college scholarships, respect for work-life balance (with Sundays off) and competitive wages. Over the years, the restaurant company has provided more than $30 million to help team members of franchisees pay for college. Interested candidates can apply at www.vancouvercfa.com.

The Vancouver Chick-fil-A is one of more than 90 new restaurants the chain plans to open across the country in 2016, creating more than 8,000 new jobs. Last year, Chick-fil-A reported an increase in the number of new restaurants initially planned for the year and record-setting annual sales of more than $6 billion, the 48thconsecutive year of sales growth since the company began in 1967.

For more information about Chick-fil-A and stories about the company’s food, people and customers across the country, visit Inside.Chick-fil-A.com. 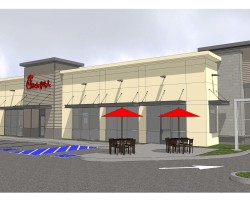 New Chick-fil-A restaurant in Vancouver, Washington to open for business in late summer 2016