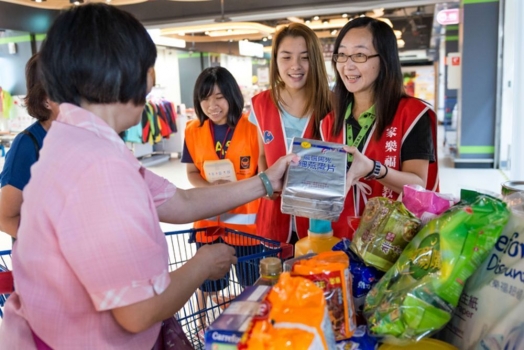 Taiwan, 2016-Oct-19 — /EPR Retail News/ — The Carrefour Foundation is launching its fourth international collection campaign with support from the European Federation of Food Banks and The Global FoodBanking Network. Teams from nearly 2000 stores will be involved in the event which will run for more than 2 months across 10 countries: Taiwan, followed by Romania, Poland, Spain, France, Italy, Argentina, Brazil, China and Belgium. Employees, customers and volunteers will all be drawing on all their resources and focusing on helping the world’s poorest people. Their target will be to beat last year’s result – the equivalent of 10 million meals donated and then redistributed to local branches of Food Banks.

Carrefour Taiwan’s teams will start collecting donations on 16 October – World Food Day; and they’ll continue until the end of December. Then on 1 November, Carrefour Romania will launch its campaign. Starting on 25 November, the teams will be joined by Carrefour Poland, Carrefour Spain and Carrefour France. The next day, the campaign will get under way at Carrefour stores in Italy, Argentina and Brazil, before commencing in China. In Belgium, it will run from 15 to 18 December.

Nearly 1500 Carrefour employees will participate in the campaign in stores, alongside volunteers from the Food Banks, in order to raise customer awareness, collect and sort the donations so these products can be easily redistributed via the Food Banks’ warehouses.

In 2015, the equivalent of 10 million meals were donated and then redistributed to charities which help people in need.

Give every day:
the equivalent of 100.5 million meals donated by Carrefour stores throughout the world

Carrefour has been a partner of the Food Banks every day since 1994. Indeed, alongside these collection campaigns, Carrefour, also donates foodstuffs to various associations on a daily basis – fresh produce in particular. In 2015, these donations amounted to the equivalent of 100.5 million meals throughout the world, and the initiative is very much in line with Carrefour’s campaign to tackle food waste,  launched since 2013 – not just in France, but also in Belgium, Brazil, Argentina, Taiwan and many other countries.

Give effectively: logistics support
The Carrefour Foundation gives the Food Banks logistics support: it provides vehicles for transporting products – including fresh products – and cold rooms for storing them. In 2016, a €357,070 grant financed the purchase of 13 refrigerated vehicles and a cold storage room. It was also used to develop training programmes about hygiene and food safety for managers, volunteers and the Food Bank Federation’s partner associations. Since 1994, Carrefour has funded the purchase of 233 facilities for the Food Banks throughout the world. These include 157 refrigerated vehicles, 31 cold rooms and refrigeration cabinets.