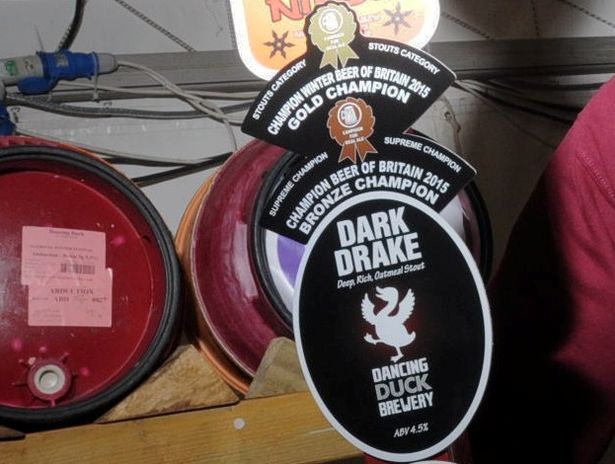 MANCHESTER, UK, 2017-Dec-12 — /EPR Retail News/ — Four breweries in Derbyshire are raising a glass to new contract wins with the Co-op as the community retailer extends its local sourcing programme across its stores in Derbyshire.

The Co-op – which last year returned to its iconic “clover leaf” designed logo – is to stock the new range in 30 of its food stores across the region.

Brewers involved in the programme include the Dancing Duck Brewery. Based in Payne Street, Derby, the deal marks Dancing Duck’s largest order to date as it celebrates its seventh anniversary of brewing this month. The award winning Dancing Duck Brewery now employs eight people, and will supply the Co-op with three of its ales; Ay Up, 22 and, Dark Drake – a beer that has previously won the accolade of Champion Stout of Britain.

Rachel Matthews, founder of Dancing Duck Brewery, said:__ “This is an exciting development for Dancing Duck, a move which supports our business development and brand awareness. Our philosophy is one of using the finest ingredients – a passion for quality which we know is shared by the Co-op – and it is this passion which goes into every pint.”

Derventio Brewery – based in Darley Abbey and named after the Roman fort and settlement at Little Chester – estimates that the deal could be worth up to 20,000 pints to them over a 12 month period. The brewery will supply its: Cleopatra; Gold and Barbarian – a stout with flavours of chocolate, Liquorice and coffee.

Pete Nash of Derventio Brewery, said: “This comes as great news. Working with the Co-op provides further potential to extend our reach and brand awareness, it is an exciting development and further supports our business development as the home market for ale continues to grow.”

Simon Dryell, Head of Local Sourcing at the Co-op, explained:“Locally produced ale is an exciting category, we see significant potential for sustainable growth, and we are delighted to champion these beers which are brewed with pride and passion to deliver consistently great quality and taste.”

The Derby Brewing Co will also supply six of its award winning ales to the Co-op. The award-winning family-run microbrewery based in Nottingham Road will supply ales including: Business As Usual; Wild Bear and, Quintessential – a crisp golden ale.

Simon Dryell, continued: “The innovation, passion, quality and drive that goes into these products is what makes them special. They are prized and loved brands locally. Our customers tell us that food provenance really matters to them, with quality, trust, convenience and value key for consumers. Backing local produce – which is made with local ingredients where possible – is about much more than just ‘hanging out the bunting’. As a community retailer, the Co-op is committed to investing in its local communities, supporting local economies and providing opportunities to showcase, support and celebrate great local produce.”