FRAMINGHAM, Mass., 2016-Aug-27 — /EPR Retail News/ — Staples (NASDAQ: SPLS) today (Aug. 25, 2016) announced a new beta test available on the Staples mobile iOS app. Customers can now send a photo of their child’s back-to-school list via the Staples Easy System on the app and a Staples associate will populate the customer’s shopping cart with everything they need. Back-to-school shopping has never been easier!

Today, many school districts offer a printed list of supplies. Staples is now offering an innovative way for parents to shop with those lists, making it easier than ever to get back-to-school shopping done. Parents will snap a photo of their back-to-school list, send it to a Staples associate via the Staples Easy System (on the app) and then be provided with the best product options within 24-48 hours. Once the list has been populated, customers can choose to buy now or customize their items in the cart, and if they want to pick up their order in store where available or have it shipped to them.

“We listened to customer feedback about their limited time for back-to-school shopping and delivered an experience utilizing the power of mobile,” said Faisal Masud, executive vice president, eCommerce and customer experience, Staples. “We know parents are busy and the process of back-to-school shopping, especially if there are multiple children involved, can be time-consuming. This new experience enables us to do the hard work on behalf of our customers and we’re already seeing 10 percent of our iOS users interact with the chat feature on a daily basis.”

The Staples Easy System uses computer vision, artificial intelligence, crowd sourced data, and mobile interfaces to enable this chat-based experience, which also makes it easy for customers to ask Staples for any changes or other service questions. The beta test is now in effect for select customers, and has applications beyond just back-to-school shopping, as businesses can use the feature to snap a photo of their office or breakroom to get product re-ordering suggestions.

This beta test program is one of many new mobile app features that Staples is initiating to make easier shopping happen. It’s the latest addition to a suite of shopping options including stores, Staples.com, Staples mobile website, Buy Online, Pick Up in Store and Staples in-store kiosks. 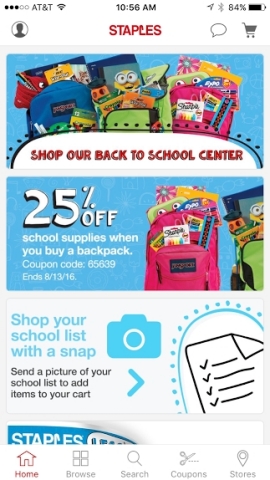 WASHINGTON, 2016-Aug-19 — /EPR Retail News/ — Although back-to-school shopping started earlier this year, families are slowly tackling their supplies lists. According to the National Retail Federation’s annual survey conducted by Prosper Insights & Analytics, the average family with children in grades K-12 has completed almost half (48 percent) of their shopping as of early August, slightly down from last year (50 percent).

“It is evident that many families are still considering price and value when shopping for their back-to-school and college needs,” NRF President and CEO Matthew Shay said. “Shopping early and often is a trend we have seen from many budget-conscious consumers over the last few years. In the weeks ahead, parents will take advantage of the aggressive deals that retailers will offer as they get ready to welcome the fall season merchandise.”

For the first time, the survey asked consumers which back-to-school items they still needed to complete their shopping list. According to the survey, 77 percent need to buy school supplies, followed by clothing (70 percent) and shoes (57 percent).

When searching for the perfect deals, 48 percent of parents are influenced by coupons, up from 43 percent last year and the highest in the survey’s history. Families will also take advantage of in-store promotions (39 percent) and advertising inserts (33 percent) to complete their shopping lists. For those who started shopping early, half (50 percent) of their purchases were influenced by coupons, sales and/or promotions.

Taking a deeper dive into classroom needs, the survey found that 64 percent of supply purchases for back-to-school are influenced by school requirements. In addition, 45 percent of parents buying electronics were influenced by their schools.

When it comes to where consumers will finish their shopping, 53 percent will head to discount stores, 51 percent to department stores, 39 percent to clothing stores and 37 percent to office supply stores. More will shop online this year, 31 percent compared with 27 percent last year, the highest in the survey’s history.

“When it comes to big spending events such as back-to-school and back-to-college, families are being very savvy in how they tackle their lists,” Prosper Principal Analyst Pam Goodfellow said. “Families are slowly completing their shopping this season while taking advantage of expected promotions that will continue through Labor Day, and spreading their budget as necessary.”

Consumers were asked for the first time which back-to-college items are still needed to complete their shopping lists. According to the survey, 61 percent still need to purchase school supplies, followed by clothing (50 percent) and personal care items (33 percent).

Debit/check cards are the most preferred method of payment for college shoppers, with 44 percent using them. Credit cards continue to make gains, with 36 percent of respondents using them to complete their purchases.

The survey asked 6,915 consumers about both back-to-school and back-to-college shopping plans. It was conducted August 2-9 and has a margin of error of plus or minus 1.2 percentage points.

About Prosper Insights & Analytics
Prosper Insights & Analytics delivers executives timely, consumer-centric insights from multiple sources. As a comprehensive resource of information, Prosper represents the voice of the consumer and provides knowledge to marketers regarding consumer views on the economy, personal finance, retail, lifestyle, media and domestic and world issues.www.ProsperDiscovery.com 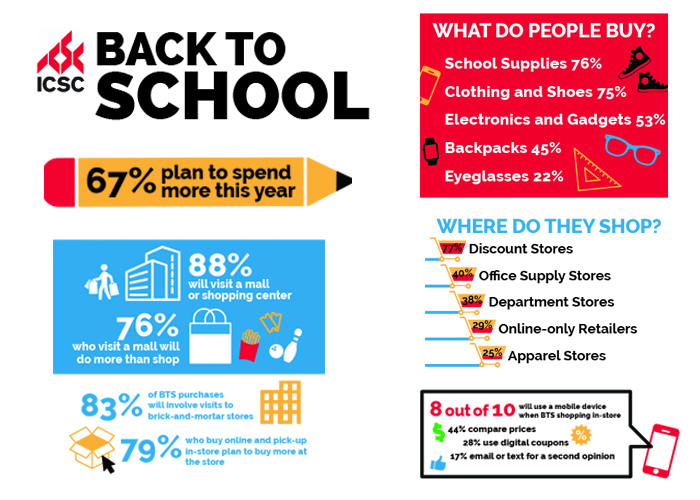