“We expect the gradual recovery of the global economy to continue, leading to better hiring rates and further reduction in the availability of space across most markets over the near term,” said Richard Barkham, Global Chief Economist, CBRE. “In this environment, we expect occupancy costs to continue rising from current levels, further limiting options for occupiers. Technology, quality and flexibility are expected to increasingly come into consideration in space use and location decisions, as occupiers will seek to contain costs and improve productivity.”

CBRE tracks occupancy costs for prime office space in 126 markets around the globe. Of the top 50 “most expensive” markets, 20 were in EMEA, 20 were in Asia Pacific and 10 were in the Americas.

Europe Middle East & Africa (EMEA)
The Eurozone’s tepid economic recovery has held back occupier activity, resulting in static prime occupancy costs in most core European markets. The region’s 0.3 percent year-over-year increase in prime occupancy costs was primarily driven by buoyant conditions in U.K. cities, most Nordic markets, and the strong recovery of the Dublin office market. The main decreases have been in central European markets, such as Warsaw (down 1.6 percent), where the economies are relatively healthy but new supply has driven down rents. In only a few markets, notably Dublin (up 34.9 percent) and London, a robust recovery in occupier demand coincided with a lack of new supply.

Hong Kong (Central) remained the only market in the world—other than London’s West End—with a prime occupancy cost exceeding $200 per sq. ft.

The most expensive market in the global ranking from the Pacific Region was Sydney (US$99 per sq. ft.), in 19th place.

Americas
In the U.S., where the economic recovery has firmly taken hold, strong leasing activity led to the highest level of quarterly net absorption since 2007, driving above-inflation increases in prime occupancy costs across all but one major U.S. market. Additionally, increasingly broad-based rising hiring rates have boosted demand for office space.

Eight North American markets recorded double-digit increases in prime occupancy costs in Q3 2014, and the top six growth markets in the Americas were all U.S. cities.

New York Midtown, the 11th most expensive market in the world, remained the most expensive Americas market, with a prime office occupancy cost of US$121 per sq. ft.

Top 10 Most Expensive Markets
(In US$ per sq. ft. per annum) 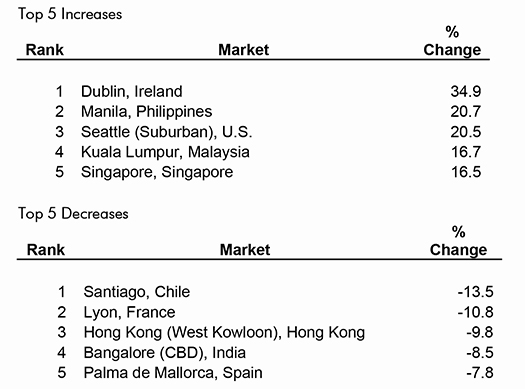 Top 50 Most Expensive Office Markets
(In US$ per sq. ft. per annum) 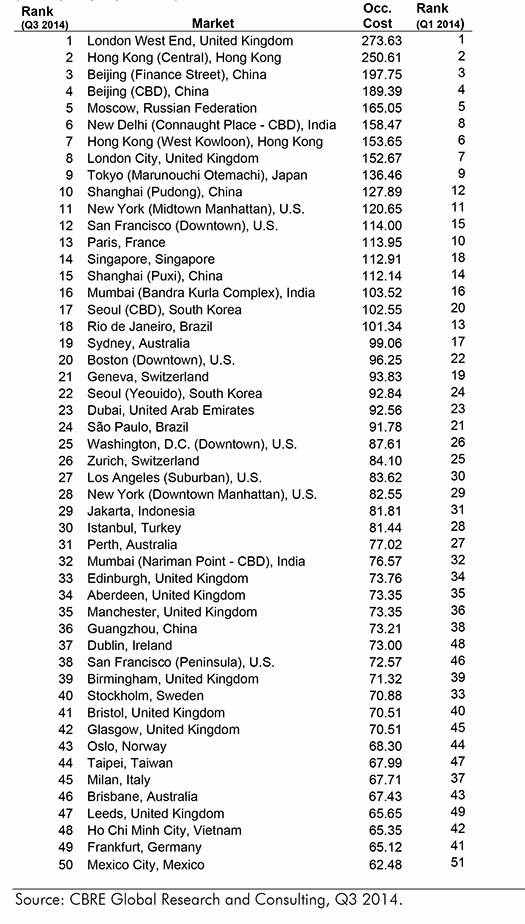