Last year, nearly 2.5 million Starbucks Cards were purchased in the U.S. and Canada on Christmas Eve – representing approximately 1,700 cards purchased per minute. One in seven American adults received a Starbucks Card last holiday season, and Starbucks is on track for another record performance in Starbucks Card sales.

Today, more than one-third of all transactions in the U.S. and Canada are paid for with a Starbucks Card, and Starbucks Cards are available in more than 31 countries worldwide, with planned expansion in 2016. Starbucks Cards are the gift that keeps on giving. When customers register a Starbucks Card with My Starbucks Rewards® they can start earning stars for purchases at participating stores that can be redeemed year-round for Starbucks beverages and food. Some restrictions apply. Details can be found at www.starbucks.com/rewards.

This holiday season Starbucks is offering more than 60 different gift card designs, from classic holiday themes to whimsical creations from the Starbucks in-house design team. Customers can mix and match for coworkers, teachers, as stocking stuffers, and for any other Starbucks lover in their life.

Beginning at $5.00, and available in customized amounts up to $500, Starbucks Cards can be purchased at any company-operated location in the U.S. or Canada in a variety of formats and designs, and digital gift cards can be given through the company’s website (www.starbucks.com/shop/card/egift) and mobile apps in the U.S.

When a My Starbucks Rewards® member pays for their purchase in participating U.S. and Canada stores using a registered card or the Starbucks® Mobile App, he or she receives one game play. The member then goes to starbucksforlife.com and logs in using their My Starbucks Rewards credentials. The customer will then play for the chance to win instant prizes, like bonus stars, or a game piece to place on their mobile game board for the chance to win Starbucks for a day, a week, a month or the grand prize, Starbucks for Life. The sweepstakes runs now to January 11, 2016.

Abbreviated rules for US: NO PURCHASE NECESSARY.  A PURCHASE WILL NOT INCREASE YOUR CHANCES OF WINNING.  LEGAL RESIDENTS OF THE 50 UNITED STATES (D.C) 18 AND OLDER AND WHO ARE MEMBERS OF THE MY STARBUCKS REWARDS® LOYALTY PROGRAM AT THE TIME OF ENTRY.  VOID WHERE PROHIBITED.  Participating stores only.  Promotion ends 1/11/16.  “Starbucks for Life” means the winner will receive a daily credit for 30 years for one free food or beverage item redeemable at participating Starbucks® stores in the U.S. Starbucks Evenings menu items excluded.  Winner must present a registered Starbucks Card.  Credits are non-transferrable and expire within 24 hours. For official rules, how to enter without purchase, prizes and odds, visit http://starbucksforlife.com.  Sponsor:  Starbucks Corporation, 2401 Utah Ave., S., Seattle, WA 981034.  Limit of one (1) instant-win-game prize per day.

Abbreviated rules for Canada: NO PURCHASE NECESSARY.  A PURCHASE WILL NOT INCREASE YOUR CHANCES OF WINNING.  LEGAL RESIDENTS OF CANADA 18 AND OLDER AND WHO ARE MEMBERS OF THE MY STARBUCKS REWARDS® LOYALTY PROGRAM AT THE TIME OF ENTRY.  VOID WHERE PROHIBITED.  Participating stores only.  Promotion ends 1/11/16.  “Starbucks for Life” means the winner will receive a daily credit for 30 years for one free food or beverage item redeemable at participating Starbucks® stores in Canada. Starbucks Evenings menu items excluded.  Winner must present a registered Starbucks Card.  Credits are non-transferrable and expire within 24 hours. For official rules, how to enter without purchase, prizes and odds, visit http://starbucksforlife.ca.  Sponsor:  Starbucks Coffee Canada, 5140 Yonge Street, Suite 1205, Toronto, ON M2N 6L7, Canada.  Limit of one (1) instant-win-game prize per day. 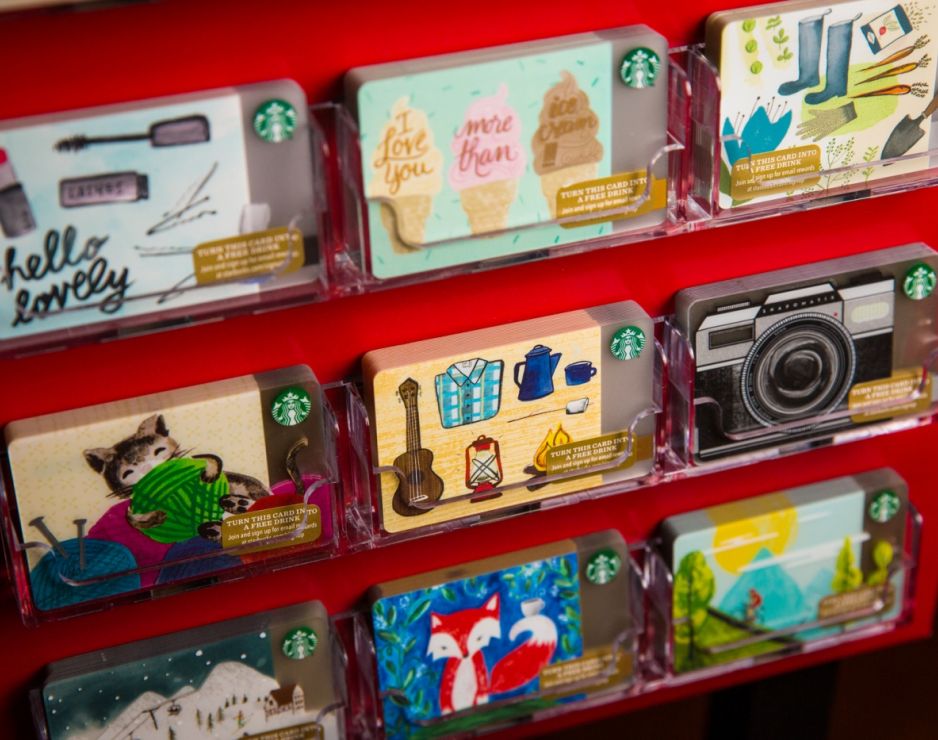 SEATTLE, 2015-11-03 — /EPR Retail News/ — Since the first Starbucks Card launched in 2001, designers have created hundreds of varieties of these collectible cards.

One of this year’s new designs, available at participating Starbucks® stores in Asia, is a Starbucks Card adorned with Swarovski® crystals. The premium mini Starbucks Card – small enough to fit on your keyring – will be available in select markets across the region.

The limited-edition mini Starbucks Card creates the feeling of a snowscape for holiday gift-giving. The design, awash in champagne and silver hues, is studded with 29 dazzling Swarovski crystals applied in Austria. This international exclusive will be available starting in November in limited quantities in China, Hong Kong, Indonesia, Philippines and Thailand.

Production of the one-of-a-kind Starbucks Card with Swarovski crystals was a collaboration between the Austria-based company for crystal application and a U.S. supplier that printed the cards. The Starbucks Card features a barcode, rather than a magnetized stripe, to enable crystals to be placed across the entire face of the card. The Starbucks Card has a minimum load amount that varies by market.

“This Starbucks Card is a premium option for customers looking to give a gift to themselves or their favorite Starbucks fan with something special,” Brewer said. “This is just the beginning of what we’re going to see for the holidays at Starbucks.”

For more information on this news release, contact Starbucks Newsroom . 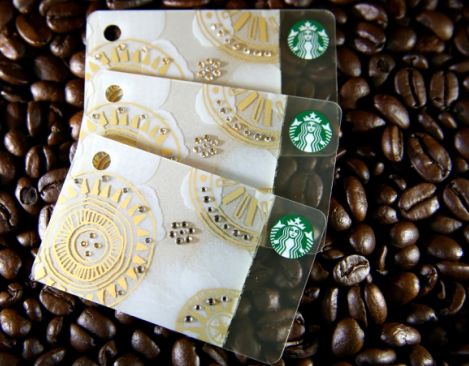 Starbucks Cards with Swarovski crystals will be available in limited quantities in China, Hong Kong, Indonesia, Philippines and Thailand this Holiday

SEATTLE, 2015-6-10 — /EPR Retail News/ — Starbucks will create nearly 200 unique Starbucks Cards for 30 countries around the world this year. These artful gift card designs reflect the essence of the local area and heritage for customers to bring home from a trip as a memento or to carry as a symbol of hometown pride.

“Think about all the passion and the artistry that goes into our handcrafted beverages. We put that same passion into Starbucks Cards,” said Ben Bauman, who manages the Starbucks Card program for stores in the U.S. and Canada.

It typically takes eight months to bring a design to life from the drawing board to store shelves. Designers in Starbucks Creative studio, or guest collaborators, use a variety of techniques to create a design. Some cards begin as paintings on canvas, cut paper, or wood blocks carved by hand. While the finished product is usually plastic, special limited edition cards have been crafted from etched stainless steel, jewelry-quality sterling silver, 10K gold, and birch wood.

“Starbucks Cards aren’t just gift cards with money to spend,” Bauman said. “They are a personal gift of the Starbucks experience handpicked just for our customers.”

Around the world, Canada’s card features the country’s iconic maple leaf composed of the handwritten names of Canadian provinces. Jakarta’s card was inspired by Betawi culture, weaving classic Betawi symbols with the city’s landscape. In London, Big Ben and the Houses of Parliament stand in silhouette to a waving Union Jack flag. Berlin’s card juxtaposes a romantic painting against the Berlin Wall.

Customers can also bring style to their wallets with Starbucks Cards created by artists and fashion designers.

Stacey Bendet, founder of fashion house Alice + Olivia, designed a card with her playful “Stace Face” for Starbucks stores in the China and Asia Pacific Region. In Japan, fashion designer Mila Owen created a card with colorful stripes. The butterflies that adorn pioneering artist Asami Kiyokawa’s card come to life thanks to a mobile app.

Starbucks Cards help ring in celebrations around the world. While Christmas and Valentine’s Day cards are available in most markets worldwide, Starbucks also offers cards for other holidays such as Diwali in India, the Sakura cherry blossom festival in Japan and Korea, and Japan’s summer fireworks festival Hanabi. Studio designers also celebrate everyday gifting occasions with graduation, birthday and seasonal cards.

What makes Starbucks Cards so collectible?

“Starbucks Cards are an enduring piece of our brand you can keep and take with you,” Bauman said. “It’s a tangible representation of the powerful connection between Starbucks customers and our brand.”

For more information on this news release, contact the Starbucks Newsroom . 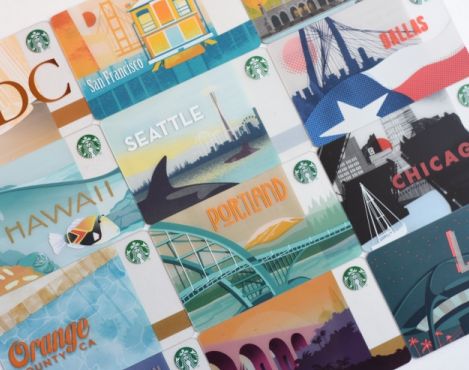 • Global comparable store sales increased 5%, with a 2% increase in traffic

Americas comp sales increased 5%, with a 2% increase in traffic

EMEA comp sales increased 4%, driven by a 3% increase in traffic

• Dollars loaded on Starbucks Cards surged to a record $1.6 billion in the quarter, up 17% over prior year Q1

• The company added 896,000 new My Starbucks Rewards members in December and now has over 9 million members

“Starbucks record Q1 fiscal 2015 financial and operating performance was exceptional by every metric and standard,” said Howard Schultz, chairman, president and ceo. “Our reimagined in-store holiday experience that included a vastly expanded assortment of Starbucks Cards, new holiday food, beverage and merchandise offerings and the opportunity to win ‘Starbucks for Life’ resonated powerfully with our customers and drove both increased traffic and tremendous excitement in our stores and around the Starbucks brand,” Schultz added.

“Starbucks results in the first quarter of fiscal 2015 were very strong, with notable growth across the globe,” said Scott Maw, Starbucks cfo. “All segments contributed to our record results in the quarter, with improved traffic growth in the US, record profitability in EMEA and 8% comps in CAP. Our continued ability to drive growth through innovation, operational excellence and our unique customer connection, along with our sharp focus on financial discipline, give us confidence in reaffirming our growth targets for fiscal 2015.”

About Starbucks
Since 1971, Starbucks Coffee Company has been committed to ethically sourcing and roasting high-quality arabica coffee. Today, with more than 21,000 stores around the globe, the company is the premier roaster and retailer of specialty coffee in the world. Through our unwavering commitment to excellence and our guiding principles, we bring the unique Starbucks Experience to life for every customer through every cup. To share in the experience, please visit us in our stores or online at www.starbucks.com and www.news.starbucks.com.