The partnership will help both Dunkin’ Brands and Liverpool FC further engage with their fans around the globe through joint promotions, digital and print advertising, and appearances during pre-season tours. Dunkin’ Brands currently has more than 18,000 points of distribution in nearly 60 countries worldwide, including nearly 11,000 Dunkin’ Donuts restaurants in 33 countries and more than 7,250 Baskin-Robbins shops in nearly 50 countries. In 2013, Dunkin’ Brands opened 790 net new restaurants around the world, with 415 of these restaurants located outside the U.S. As a testament to its global fan base, Liverpool FC, an English Premier League football club, has over 200 Official Supporters Clubs all over the world in 62 different countries, including the UK, the USA, Spain, Germany, Brazil, China, Japan, Thailand, India, Malaysia, Australia and South Africa.

“With 18 English league titles and five European Cups, Liverpool FC is one of the world’s most renowned football clubs, so we’re very excited to partner with them as we continue to grow our two winning brands, Dunkin’ Donuts and Baskin-Robbins, around the world,” said John Costello, President, Global Marketing and Innovation for Dunkin’ Brands. “We look forward to working with Liverpool FC on a number of exciting marketing initiatives and engaging with football fans worldwide in the coming years through this partnership.”

“We’re delighted to be joining forces with Dunkin’ Brands, one of the world’s most iconic quick service restaurant names. Dunkin’ Donuts will be our official coffee, tea and bakery provider and Baskin-Robbins will be our official ice cream provider, and we welcome both to the LFC family,” said Billy Hogan, Chief Commercial Officer for Liverpool FC. “Fans across the globe will benefit from this partnership as Dunkin’ Brands looks to expand their business, bringing exciting partnership activation to new territories and ultimately helping to bring fans closer to the Club no matter how far away from Anfield they live.”

Key elements of the Dunkin’ Brands and Liverpool FC marketing partnership include:

• As a socially responsible business, Liverpool FC is proud of its heritage and plays a proactive role in its communities through its official charity, Liverpool FC Foundation. By delivering a range of award-winning programmes, the Foundation motivates and inspires children and adults, both at home and overseas, using football and the power of the Liverpool FC badge. Its contribution has been recognised by the award of a Community Mark from Business In The Community

• Liverpool FC is a global brand and works with leading edge commercial partners around the world providing unparalleled commercial opportunities. 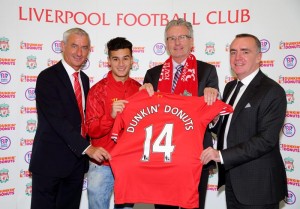