“Our primary task was to create a great-tasting breakfast sandwich for people looking for a better-for-you alternative,” said Kelly Buckley, 7-Eleven vice president of fresh food innovation. “We have fresh-cut fruits, salads, yogurt parfaits and healthy, low-calorie sandwiches, and we wanted a breakfast option that fell into that better-for-you category without sacrificing taste and quality.”

Just don’t call it diet food. According to a study by the University of Scranton, losing weight is the top New Year’s Resolution people made in 2014. Yet the term “diet” has lost favor, even among those who admit they would like to lose a few pounds. Instead, they are looking to make healthier choices in the New Year and seek better balance in the foods they choose. Millennials especially avoid the D-word. So-called “dieting” peaked in 1991 when 31 percent of Americans said they were following a diet. Today, the number stands at 19 percent, but is only 12 percent for the 18-34-age crowd.

“Many people are looking to make better choices, but not at the expense of flavor, quality, convenience or value,” Buckley said. “Eating away from home adds extra challenges for those looking for healthier food options. We wanted to remove that dilemma for the morning crowd who prefers a hot breakfast that is low-calorie, low-fat and high-protein.”

And breakfast sandwiches are “hot,” according to recent consumer dining polls. The portable, hand-held breakfast cracked the top-10 breakfast foods list compiled by The NPD Group market research firm, beating out bacon for the last spot on the list. Coffee maintains its No. 1 ranking on the list, however, for those eating out, breakfast sandwiches even beat this morning “waker-upper.” 7-Eleven has the morning menu covered on both counts, with the new Egg White Sandwich and several other breakfast sandwiches, along with its new, limited-edition Santa Rosa Guatamalan coffee. “Eating healthy shouldn’t be hard,” Buckley said. “When it comes to fresh foods, we try to meet our customers’ cravings, whether they’re looking for an indulgent treat or a healthy start to the day.”

7-Eleven has been expanding its fresh food menu to include healthier options like entree and side salads with low-fat dressings, better-for-you sandwiches, Yoplait yogurt parfaits with fresh fruit and Nature’s Valley granola, vegetable and hummus snacks, fresh-cut and whole fruit, and hard-boiled eggs.

About 7-Eleven, Inc.
7-Eleven, Inc. is the premier name and largest chain in the convenience retailing industry. Based in Dallas, Texas, 7-Eleven operates, franchises or licenses some 10,200 7-Eleven® stores in North America. Globally, there are close to 51,700 7-Eleven stores in 16 countries. During 2012, 7-Eleven stores generated total worldwide sales close to $84.8 billion. 7-Eleven has been honored by a number of companies and organizations recently. Accolades include: #2 on Franchise Times Top 200 Franchise Companies for 2013; #3 spot on Entrepreneur magazine’s Franchise 500 list for 2012, and #3 in Forbes magazine’s Top 20 Franchises to Start. 7-Eleven is No. 3 on Fast Company magazine’s 2013 list of the “World’s Top 10 Most Innovative Companies in Retail” and among the Top Veteran-Friendly Companies for 2013 by U.S. Veterans Magazine and on GI Jobs magazine’s Top 100 Military Friendly Employers for 2014. Hispanic Magazine named 7-Eleven among its Hispanic Corporate Top 100 Companies that provide the most opportunities to Hispanics. 7-Eleven is franchising its stores in the U.S. and expanding through organic growth, acquisitions and its Business Conversion Program. Find out more online at www.7-Eleven.com. 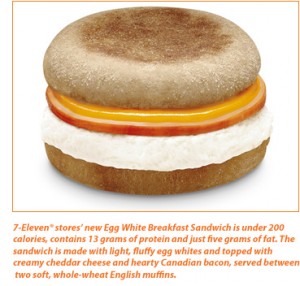 Wayne, NJ, US, 2014-1-14 — /EPR Retail News/ — Babies“R”Us®, the nation’s leading dedicated juvenile products retailer announced today that it has entered into a strategic partnership with TheBump.com, a leading pregnancy and parenting website that offers advice, ideas, resources and support to first-time parents as they navigate pregnancy. Used by more than 18 million parents to date, the Babies“R”Us Registry will now be available to a new, expanded audience of moms-to-be who can create and share their registry directly from TheBump.com via its Gift Registry Center. With more than 5 million monthly unique visitors to TheBump.com, moms-to-be visit the Gift Registry Center for advice on where to register. In addition, the patented registry search tool on TheBump.com allows friends and family to easily find Babies“R”Us registrants’ lists and buy them a gift. The partnership will continue to evolve and develop over time.

“When a mom-to-be learns she is expecting, she is eager to obtain information and recommendations from trusted parenting resources. Time and again, millions of moms have turned to both Babies“R”Us and The Bump throughout their journey to motherhood,” said Peter Reiner, Senior Vice President, Marketing, Toys“R”Us, U.S. “Through this partnership, we are pleased to extend the reach of our Babies“R”Us Registry even further, and allow parents convenient and efficient access to create, build and share their registries with their loved ones through a respected and reputable site.”

“Our members rely on TheBump.com for its expansive content, resources, interactive tools and online community, which essentially equips them with everything they need to know about becoming a mom,” said Kathleen Kimple, Executive Vice President of e-Commerce and Registry, XO Group Inc. “That’s why our partnership with Babies“R”Us, the most widely-used baby registry, is so fitting, as moms-to-be will be able to secure information and advice to then create a registry with a retailer they trust.”

The two brands will support the partnership with a comprehensive cross-promotional program, inclusive of digital advertising, signage, registry materials and via The Bump My Pregnancy Calendar mobile app and newsletters, among other avenues.

About Toys“R”Us, Inc.
Toys“R”Us, Inc. is the world’s leading dedicated toy and juvenile products retailer, offering a differentiated shopping experience through its family of brands. Merchandise is sold in 879 Toys“R”Us and Babies“R”Us stores in the United States and Puerto Rico, and in more than 705 international stores and over 180 licensed stores in 35 countries and jurisdictions. In addition, it exclusively operates the legendary FAO Schwarz brand and sells extraordinary toys in the brand’s flagship store on Fifth Avenue in New York City. With its strong portfolio of e-commerce sites including Toysrus.com, Babiesrus.com, eToys.com and FAO.com, it provides shoppers with a broad online selection of distinctive toy and baby products. Headquartered in Wayne, NJ, Toys“R”Us, Inc. employs approximately 70,000 associates annually worldwide. The company is committed to serving its communities as a caring and reputable neighbor through programs dedicated to keeping kids safe and helping them in times of need. Additional information about Toys“R”Us, Inc. can be found on Toysrusinc.com. Follow Toys“R”Us, Babies“R”Us and FAO Schwarz on Facebook at Facebook.com/Toysrus, Facebook.com/Babiesrus and Facebook.com/FAO and on Twitter at Twitter.com/Toysrus and Twitter.com/Babiesrus.

About TheBump.com
The Bump is the only multiplatform resource giving first-time moms the inside scoop on fertility, pregnancy and new mommyhood, reaching millions of moms each year through TheBump.com and The Bump local guide. The Bump editorial team, “born” from The Knot, provides new moms stage-by-stage advice, stylish ideas, local resources, interactive tools and a savvy online community whose members are obsessed with knowing about everything baby. The Bump is a part of XO Group Inc. (NYSE: XOXO), a global media and technology leader devoted to weddings, pregnancy and everything in between. Follow The Bump on Twitter @thebump.

The company also announced that in 2014 on a global basis its franchisees and licensees plan to open 685 to 800 net new Dunkin’ Donuts and Baskin-Robbins locations.

“We are delighted with Dunkin’ Donuts’ accelerated growth across the U.S., which demonstrates ongoing strong demand for our brand, and we remain on track for a five percent net annual development rate for Dunkin’ Donuts U.S. We are especially pleased with the solid start to our development plans in California where, to date, we have executed agreements for nearly 100 traditional restaurants. Additional good news is that in 2013 Baskin-Robbins, which has been experiencing strong growth internationally for many years, also had positive net development growth in the U.S., marking a major milestone in the turnaround of the brand domestically,” said Nigel Travis, Chairman and Chief Executive Officer, Dunkin’ Brands. “All totaled, our franchisees and licensees opened 790 net new restaurants globally in 2013, and this year we expect to open 685 to 800 net new Dunkin’ Donuts and Baskin-Robbins restaurants on a worldwide basis. We believe a major contributor to our strong year-over-year growth is the disciplined approach we consistently take to improving franchisee economics.”

In 2013, Baskin-Robbins experienced positive net new growth in the U.S., opening a net number of four new locations in markets including California, Florida and Texas. The brand closed the year with development commitments for new units in markets including Arizona, California, Florida and Texas, and launched a new restaurant design option for Baskin-Robbins in the U.S.

In 2014, the company expects its franchisees and licensees to open 5 to 10 net new Baskin-Robbins restaurants in U.S.

In 2013, Dunkin’ Donuts opened 138 net new restaurants outside the U.S., including its first restaurants in the United Kingdom in the Greater London area, and in Vietnam in Ho Chi Minh City. The Company also stepped up its European development efforts, and with the signing of five new franchise agreements in Germany, plans to have 150 restaurants in that country over the next several years, up from its year-end number of 41 locations. Additionally, Dunkin’ Donuts began franchise recruitment efforts in Brazil, Scandinavia and Turkey.

At the end of the year, Dunkin’ Donuts also signed a master franchise agreement with Fast Gourmet Group (FGG) to develop the brand in Eastern China. The agreement calls for the development of more than 100 Dunkin’ Donuts restaurants in the Shanghai, Jiangsu and Zhejiang regions, with the first locations planned to open in Shanghai in 2014.

Baskin-Robbins opened 277 net new locations outside the U.S. in 2013. It also announced franchise recruitment in South Africa and Germany and a joint venture agreement with Galadari Ice Cream company to further develop the brand in Australia. Additionally in 2013, the company signed a licensing agreement for the Philippines and nine new store development agreements for Baskin-Robbins in China, which together would add 375 new Baskin-Robbins restaurants in that country over the next 10 years.