David Beckham will star in a new campaign to launch the spring collection of David Beckham Bodywear at H&M. Shot by director Nicolas Winding Refn, known for his movies Drive and Only God Forgives, the campaign will debut during the US Super Bowl on February 2nd 2014.

Stockholm, Sweden, 2014-1-23 — /EPR Retail News/ — In the action-packed plot, David is locked out of a photo shoot on a rooftop in just his underwear, with no way down.  He has to go to any length to get to safety, performing all his own stunts in the process. David has filmed two alternative versions, which will be put to a vote on hm.com to find the people’s favourite, voting starts January 27th.

“It was so exciting to work with one of my favourite directors, Nicolas Winding Refn, on my new campaign for H&M. Nicolas pushed me hard to create an action-packed film, which shows off this season’s new heritage-inspired bodywear at its best,” says David Beckham.

“I loved working with David for his new campaign. He is a natural in front of the camera, and was fearless when performing his own stunts. The campaign is funny, smart and spectacular, and shows the many different sides of David’s personality,” says Nicolas Winding Refn.

The campaign features pieces from the Spring David Beckham Bodywear collection, which sees a fresh take on heritage. Stripes of varying width are introduced on long-sleeve Henleys, vests and trunks, as well as varsity style lettering on the back of long-sleeve raglan tops. Also debuting will be David Beckham Bodywear pieces for kids. A mini-me collection for boys with Henley’s, vests, trunks, long johns and pyjama shorts. The collections will be available in selected H&M stores and online from January 30.

These new pieces join the core David Beckham Bodywear collection, which has already become a staple in the wardrobes of men worldwide since its launch in February 2012.

Please note this number is only for media representatives. For other enquiries contact H&M’s switchboard on +46 8 796 55 00. 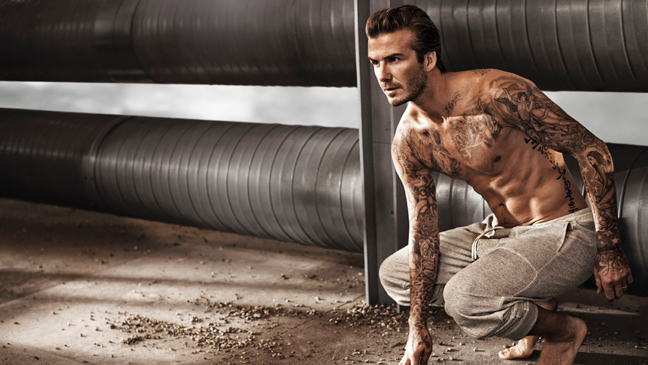