Grand Rapids, MI, US, 2014-1-27 — /EPR Retail News/ — Each year a few rising stars in the produce department capture the public’s attention and are touted by friends, foodies and food bloggers alike. But what are consumers actually buying at the grocery store? Two experts from Grand Rapids, Mich.-based retailer Meijer – Produce Buyer Scott Calandra and Healthy Living Advisor and Registered Dietitian Melissa Hehmann – share what fresh produce shoppers bought in Meijer stores across the Midwest and predict what to watch for this year.

Kale is the leafy green veggie that took the nation by storm in 2012 and continued to enjoy strong growth in 2013. Kale’s “Power Green” cousins Brussels sprouts, organic salads, and bagged greens topped the retailer’s highest-selling produce list. Bagged baby kale saw the biggest growth in 2013 with a nearly 200 percent sales jump from 2012, according to Meijer Produce Buyer Scott Calandra.

Why the big jump? It’s all about nutrition, explains Meijer Healthy Living Advisor and Registered Dietitian Melissa Hehmann. “The leafy, nutrient-dense foods in the Power Green category pack a big nutritional punch without a lot of calories – a great combination,” she said. “The popularity of bagged Power Greens is all about convenience – less time spent on washing, trimming and chopping.”

As consumers gravitate toward more nutritional options at mealtime, they don’t necessarily want to compromise on taste. At the same time, consumer palates are becoming more sophisticated.  Home cooks, who would have previously added salt, are more often using fresh herbs like basil and cilantro to enhance flavor.

“Salt used to be the go-to way to bring out the taste of foods,” said Hehmann, “but we’re trying to educate consumers to limit their sodium intake to reduce the risks associated with high blood pressure. Herbs are a great alternative, and another excellent source for antioxidants.”

With trends like “Meatless Monday,” Meijer is seeing more and more consumers swapping out meats for veggie alternatives. “The meaty texture and savory flavor of portabella mushrooms make them a good option for someone looking for a meat substitute,” Calandra said. Families aren’t just replacing meat, but finding ways to make it stretch further, such as mixing chopped mushrooms into ground beef. “Which, coincidentally, is also a great way to sneak more vegetables into your family’s diet,” Hehmann added.

Consumers have moved on from carbohydrate avoidance to acceptance and are now looking for healthier varieties of carbs, according to Hehmann. “Sweet potatoes offer more vitamins and fiber than traditional white potatoes, and add a vibrant color to dishes. And research has actually shown that the fiber gained from eating steamed or boiled sweet potatoes can help reduce the blood sugar of people with diabetes,” Hehmann said.

Sales of the mandarin and sweet orange hybrid at Meijer more than doubled in 2013. Clementines are an easy-to-peel fruit, which makes them a “healthy low calorie snack for kids and adults alike,” Hehmann said.

Meijer predicts that kale’s popularity will continue to pave the way for other Power Greens like Swiss chard and turnip greens this year. “Consumers are being more adventurous in produce choices, so if they liked kale, they may reach for another unfamiliar green,” Hehmann said. In addition to trying new produce, consumers are rethinking traditional staples like cauliflower. “Cauliflower can be mashed like potatoes, grilled like steak, and used as a gluten-free option for things like pizza crust.”

Meijer also expects to see continued growth in organics and the Meijer Locally Grown program, which supplies Meijer stores around the Midwest with fruits and vegetables from more than 100 local growers in Michigan, Indiana, Illinois, Ohio and Kentucky. “Organics is one of our fasted growing categories in the Meijer produce department,” Calandra said. “And Meijer shoppers enjoy shopping produce grown near their community and around the Midwest.”

About Meijer
Meijer is a Grand Rapids, Mich.-based retailer that operates 204 supercenters and grocery stores throughout Michigan, Ohio, Indiana, Illinois and Kentucky. As a pioneer of the “one-stop shopping” concept, Meijer stores have evolved through the years to include expanded fresh produce and meat departments, as well as pharmacies, comprehensive electronics departments, garden centers and apparel offerings. Additional information on Meijer and the ability to shop for more can be found at www.meijer.com. Follow Meijer on Twitter @twitter.com/Meijer and @twitter.com/MeijerPR or become a fan at www.facebook.com/meijer. 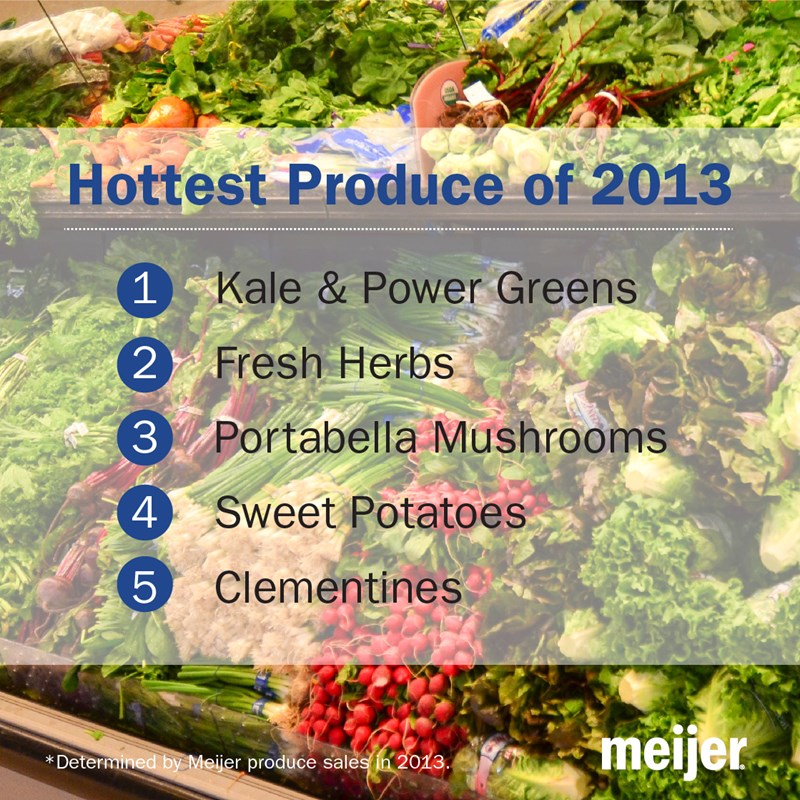