Grand Rapids, MI, US, 2014-1-29 — /EPR Retail News/ — Meijer is offering its younger customers a chance for a co-starring role in an upcoming television commercial at the cost of one cent. The commercial is scheduled to debut across the Midwest retailer’s five-state footprint in 2014, and will feature images of children riding its iconic penny horse, Sandy, over several generations.

Meijer is asking customers to submit photos featuring their children or their younger selves riding Sandy through a “Star with Sandy” contest application on the Meijer Facebook page. Ten winners will receive $100 Meijer gift cards and all photos have the chance to appear in the commercial, announced Nicole Laughlin, vice president of brand development for the Grand Rapids, Mich.-based retailer.

“Sandy is unique to Meijer and we’re pleased to have her as part of our shopping experience,” Laughlin said. “We look forward to sharing these special moments in our advertising, to help us say ‘hello’ to new neighbors and bring a smile to seasoned Sandy riders in the communities we’ve served for much longer.”

The iconic mechanical horse made its debut with the opening of Thrifty Acres in 1962, when the late Fred Meijer, who had a long history with horses, learned of 10-cent pony rides at a supermarket in Nebraska. Fred thought a dime was a lot of money and decided to charge one penny, a price which has since become a symbol of family shopping at reasonable prices.

“If you can put a penny in you can be a hero to the kids for a penny, or for three cents for three kids,” said Fred in “Fred Meijer: In His Own Words.”

Sandy has been a fixture at the front of all Meijer stores across the Midwest for decades, and is often the last thing a child remembers on the way out of the store. The only time Fred Meijer felt bad for having ponies in the store was in 1964, when the Greenville, Mich. store burned down. He remembered children were crying because they thought the horse had burned up.

“My dad believed in making things affordable for our customers and that included Sandy,” Meijer Co-Chairman Doug Meijer said. “Riding Sandy is a memory shared by so many children and parents who shop at our stores. But the real magic happens when those children grow up and bring their own kids back for a ride.”

The Star with Sandy contest is open through Feb. 6. Entries can be submitted at www.Facebook.com/Meijer.

About Meijer: Meijer is a Grand Rapids, Mich.-based retailer that operates 204 supercenters and grocery stores throughout Michigan, Ohio, Indiana, Illinois and Kentucky. As a pioneer of the “one-stop shopping” concept, Meijer stores have evolved through the years to include expanded fresh produce and meat departments, as well as pharmacies, comprehensive electronics departments, garden centers and apparel offerings. Additional information on Meijer and the ability to shop for more can be found at www.meijer.com. Follow Meijer on Twitter @twitter.com/Meijer and @twitter.com/MeijerPR or become a fan at www.facebook.com/meijer. 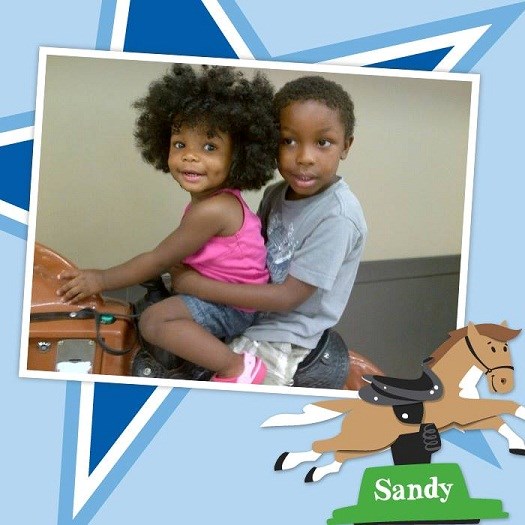