ALEXANDRIA, VA, 2014-3-12 — /EPR Retail News/ — Despite a sharp increase in gas prices over the past month and consumer expectations that prices will climb higher over the next 30 days, consumers continue to feel optimistic about the economy, according the latest monthly NACS Consumer Fuels Survey that examines how gas prices affect consumer sentiment.

Gasoline demand typically increases in the spring, adding pressure to the fuels system that is transitioning to producing summer-blend fuels. Last year, demand per day in August was 10.1% higher than in January. This demand increase of over 800,000 barrels is more than the production capacity of the largest refinery in the United States.

Despite the higher prices and expectations of more increases, nearly half of all consumers (44%) are optimistic about the economy, a steady increase from 43% a month earlier and solid jump from the 35% who expressed optimism in October 2013 when consumer sentiment bottomed out.

Consumer sentiment differed across the country. The Northeast, pummeled by a harsh winter, had the lowest optimism about the economy (39%), while the West was the most optimistic (47%).

Consumers’ miles per dollar decreased in March, dropping 3.9% to 6.92 miles per dollar. NACS added the metric in 2014 to gauge how consumer perceptions about their self-reported mileage and gas prices might also affect their moods.

“The latest increase in consumer optimism is great news for convenience stores and other retailers who saw slim sales as the harsh winter weather in early 2014 kept consumer spending in check,” NACS Vice President of Government Relations John Eichberger. “That fact that consumer optimism continues to increase while every other metric that we track related to consumer optimism trended down is a positive indicator for retailers, who typically see stronger sales inside the store as the weather heats up and daylight hours increase.”

Every month, the National Association of Convenience Stores (NACS) conducts a nationwide survey in partnership with Penn, Schoen and Berland Associates LLC to measure consumer perceptions about gas prices and how they relate to broader economic conditions. For the February survey, 1,089 gas consumers were surveyed from March 4-6, 2014. The margin of error for the entire sample is +/-2.86 at the 95% confidence interval and higher for subgroups. The OPIS weekly national average price for gas was $3.452 on March 3, the week in which the survey was fielded. Summary results from this and previous surveys can be found at www.nacsonline.com/gasprices.

Founded in 1961 as the National Association of Convenience Stores, NACS (nacsonline.com) is the international association for convenience and fuel retailing. The U.S. convenience store industry, with more than 149,000 stores across the country, posted $700 billion in total sales in 2012, of which $501 billion were motor fuels sales. NACS has 2,100 retail and 1,600 supplier member companies, which do business in nearly 50 countries. 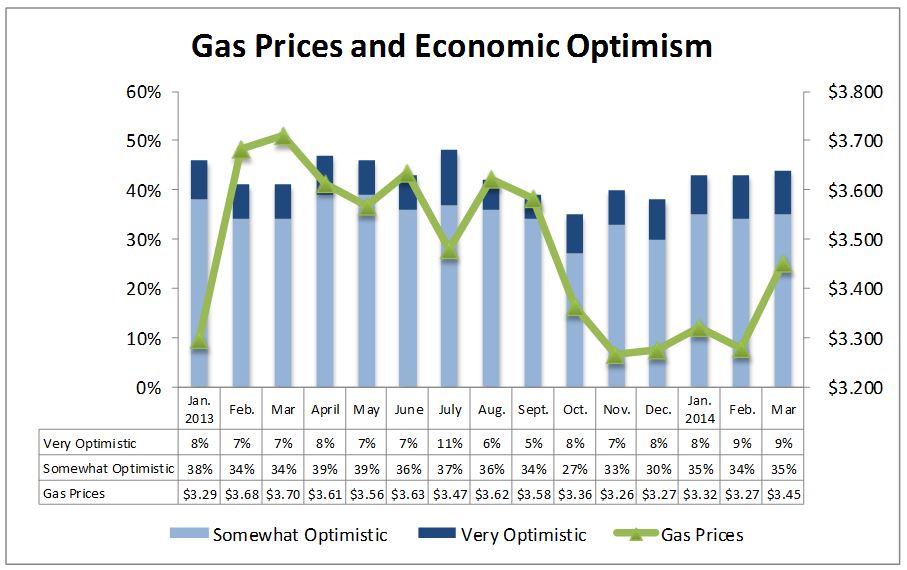