Dylan Kwasniewski to Drive No. 42 up & up Chevrolet Camaro for Five Races

CONCORD, N.C., 2014-5-15 — /EPR Retail News/ — Target is expanding its sponsorship in the NASCAR Nationwide Series (NNS) to include the up & up brand as the primary sponsor on the No. 42 Turner Scott Motorsports’ (TSM) Chevrolet Camaro for six races.  The up & up brand will make its track debut this weekend during the Get to Know Newton 250 Presented by Sherwin Williams NNS race at Iowa Speedway.

Additionally, Chip Ganassi Racing with Felix Sabates (CGRFS) development driver Dylan Kwasniewski, who is competing full-time this season in the NNS for TSM, will drive the No. 42 up & up Chevy to fill-in for Kyle Larson during each of the five NNS races where the series does not race at the same track as the NASCAR Sprint Cup Series (NSCS).  Larson, who is the full-time driver of the No. 42 Target Chevrolet in the NSCS for Target Chip Ganassi Racing with Felix Sabates, currently has the No. 42 Chevy Camaro for TSM fourth in the NNS owner standings, with a win at the AutoClub Speedway in Fontana, CA earlier this year.

About up & up™: The up & up brand offers Target guests’ more than 1,200 everyday essential products from across the store, spanning household, healthcare, beauty, personal care, baby, and school and office supplies. The up & up brand offers guests national brand quality or better, but at a lower price, offering an average savings of 10 to 30 percent.

About Dylan Kwasniewski: Kwasniewski is currently in his rookie season in the NNS, and is 13th in the driver standings through nine races.  He started the season by winning the pole at Daytona International Speedway, becoming the youngest NNS pole-sitter in Daytona history.  Kwasniewski is a former NASCAR K&N Pro Series West and East champion, and is the first driver to win titles in both series.

“We are excited to continue to showcase Target and their other brands in the Nationwide Series with up & up on the car for six races.  Having the up and coming Team Ganassi development driver Dylan Kwasniewski in the No. 42 up & up Nationwide car for the five non-companion races is a good fit and will allow Kyle Larson to keep his focus on his Sprint Cup campaign and achieving his and the team’s goals this season.”

“This gives Target an important opportunity to tell a broader story around our up & up brand, and fits well with the other innovative Target-exclusive products and services that we have showcased on the No. 42 car so far this year, like Cartwheel and Target Ticket.”

About Chip Ganassi Racing Teams
Chip Ganassi has been a fixture in the auto racing industry for over 25 years and is considered one of the most successful as well as innovative owners the sport has anywhere in the world.  Today his teams include four cars in the Verizon IndyCar Series, two cars in the NASCAR Sprint Cup Series, and one Prototype in the TUDOR United SportsCar Championship.  Overall his teams have 17 championships and 160 victories, including four Indianapolis 500s, a Daytona 500, a Brickyard 400, five Rolex 24 At Daytonas and the 12 Hours of Sebring.  Ganassi boasts state-of-the-art race shop facilities in Indianapolis and Brownsburg, Ind. and Concord, N.C., with a corporate office in Pittsburgh, Penn. 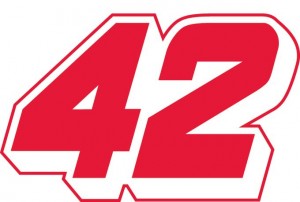