ALEXANDRIA, VA, 2014-7-16 — /EPR Retail News/ — Consumer optimism about the economy reached a 12-month high, good news for retailers hoping that a strong second half of 2014 can compensate for sluggish sales earlier this year.

Consumer optimism surged from 39% to 46% — the highest level of optimism since it stood at 48% in July 2013. Younger consumers are particularly optimistic, with a majority (55%) expressing optimism. Every region in the country recorded strong increases in optimism, which varied from 44% in the South to 48% in the West. The 7-point jump in optimism was the largest recorded since January 2013 when the National Association of Convenience Stores (NACS) introduced its monthly NACS Consumer Fuels Survey to examine how gas prices affect consumer sentiment.

“We have seen the shift in optimism at convenience stores over the past month,” said Jeff Lenard, vice president of strategic industry initiatives at NACS. “As the weather heats up, so has travel and purchases of drinks and snacks for on-the-go drivers. Strong sales this summer can certainly compensate for the slower sales affected by the harsh winter over the first half of the year.”

Interestingly, optimism skyrocketed even though consumers say that gas prices increased and that they expect prices to continue to rise. While prices over the past month decreased by 0.3 cents per gallon, 69% of consumers said that prices are higher, and 64% say that they expect them to increase over the next 30 days.

Penn, Schoen and Berland Associates LLC conducted the NACS survey; 1,112 gas consumers were surveyed July 8-10, 2014. The margin of error for the entire sample is +/-2.94 at the 95% confidence interval and higher for subgroups. The OPIS weekly national average price for gas was $3.661 on July, the week in which the survey was fielded. Summary results are at www.nacsonline.com/gasprices. 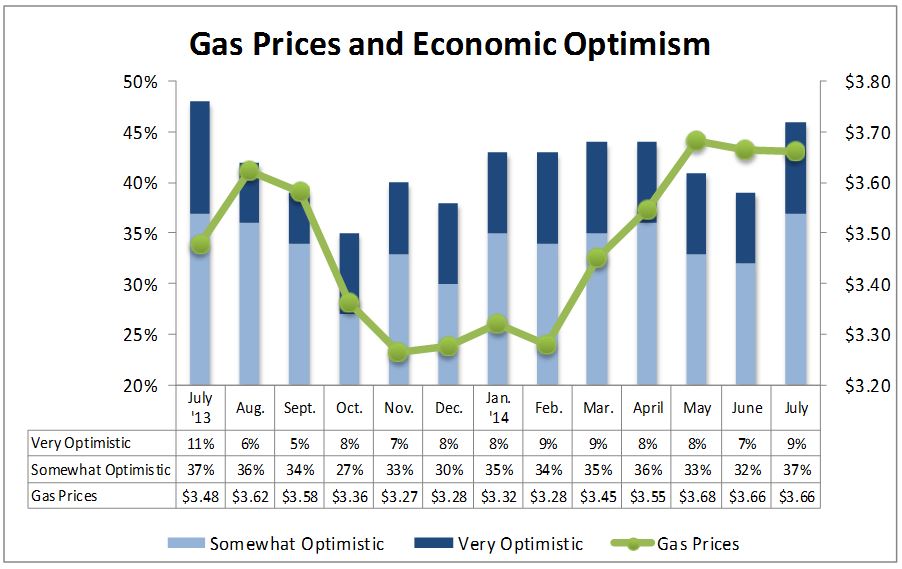