Army Lt. Col. David Cabrera was shuttling between bases on the outskirts of Kabul when a van packed with explosives pulled up next to his vehicle. A suicide bomber set off a blast that killed more than 20 people, including Cabrera and three other U.S. service members.

Holding the little hands of seven-year-old Max and five-year-old Roanin, August said, “Guys, I have something I need to tell you. There’s been an accident. Daddy’s been killed. He’s not coming home.”

More heart-breaking talks followed, including a conversation about what should be engraved on their father’s tombstone in Arlington National Cemetery. Max immediately knew what to inscribe. At the bottom of the smooth, stark white stone – below the name David E. Cabrera, LTC Lieutenant Colonel, U.S. Army, Nov 26 1969, October 29, 2011 – the family added three words: Soldier of Kindness.

“I have such a high degree of respect for Max and the Cabrera family,” said Howard Schultz, Starbucks chairman, president and ceo. “Military families and service members demonstrate courage, conviction and valor and their stories need to be told.”

Schultz and co-author Rajiv Chandrasekaran are telling Max’s story and nine others in “For Love of Country: What Our Veterans Can Teach Us About Citizenship, Heroism, and Sacrifice.” The book highlights the post-military careers of veterans serving their communities in extraordinary ways, and offers compelling accounts of valor displayed by service members in Iraq and Afghanistan – battlefields that are familiar to Chandrasekaran.

Learning from men and women in uniform

Now a senior correspondent and associate editor of The Washington Post, Rajiv Chandrasekaran was the newspaper’s bureau chief in Baghdad in 2003 and 2004 and a war correspondent in Afghanistan from 2009 to 2011.

“I’ve walked many miles shoulder-to-shoulder with our men and women in uniform. I’ve been on many patrols, been shot at, had things explode near me,” he said. “What I hadn’t done much of is connect with our veteran population in a personal way.”

That changed for Chandrasekaran when he began digging into a landmark survey from The Washington Post and the Kaiser Family Foundation that explored the views and experiences of U.S. military members who served in Iraq or Afghanistan in the period after the terrorist attacks of Sept. 11, 2001.

The majority of post 9/11 veterans surveyed said while they appreciate gestures of support from the American public, they feel disconnected from civilian life. Many reported their physical and mental health was worse than before they deployed and they had challenges transitioning from military service to civilian jobs back home.

“This gave me a deeper appreciation for the range of veteran experiences from those who are struggling with mental and physical wounds and employment challenges, to those who are thriving and doing remarkable things in their communities,” Chandrasekaran said. “These are experiences and stories the broader population does not know.”

Part of the “disconnect” is that while an estimated 2.6 million military members have served since 9/11, that’s less than one percent of the country’s population. Most Americans do not personally know someone who wears a uniform in service to the country today, said Chandrasekaran. Schultz didn’t either until he began a journey well over a year ago to understand active duty service members and veterans.

“I would see men and woman in uniform at a public event and would be a respectful as possible, but it wasn’t until visiting West Point that I was overwhelmed by the young people there and the fact that our military men and women give so much to this country,” he said. “I feel like we haven’t given them their due.”

A passion to learn more about the needs of active duty service members and veterans as they transition to civilian jobs took Schultz to military bases around the country. It also led to many discussions with Robert M. Gates, former U.S. Secretary of Defense and current Starbucks board member.

One year ago, Schultz set Starbucks on a path to hire 10,000 veterans and military spouses by the end of 2018. In addition to technical and logistical skills, veterans and reservists bring a “high level of character” to any organization, according to Col. Daniel Walrath, Chief of Staff, U.S. Army 7th Infantry Division at Joint Base Lewis-McChord in Washington state.

“They thrive in complex situations defined by ambiguity, uncertainty, and unexpected situations that they have not been trained for,” said Col. Walrath. “Being surrounded by those conditions, our military men and women are able to come up with creative solutions and then organize and lead people to success.”

Schultz and his wife Sheri have also pledged extensive support to help veterans make successful transitions to civilian life through the Schultz Family Foundation’s Onward Veterans initiative. Earlier this year the foundation announced a financial commitment to help America’s veterans overcome the challenges of returning to civilian life and maximize their skills for businesses and communities.

As Schultz became more immersed in veterans issues, he met Chandrasekaran. Together, they decided to write a book to bridge the gap between civilians and veterans in our society.

Saying more than ‘thank you for your service’

Although the co-authors approached “For Love of Country” from different backgrounds, though their common goal was to give Americans a deep understanding of the men and women who went off to fight for their country and what they’re doing now that they’re back home.

“We hope readers will take a moment to pause and think about the brave men and women in their midst who stood up to serve so the rest of us could go on with our lives,” said Chandrasekaran. “Instead of being detached from those who protect us today, perhaps in a small way this book will stimulate conversations around the country.”

Chandrasekaran said it’s clear from talking with hundreds of service men and women that veterans don’t want pity or charity, but there is more we can do beyond saying “thank you for your service” when we see someone in uniform at an airport, or applauding politely when they’re recognized at sporting events.

“Each of us – individuals and businesses – have a responsibility to honor them, hire them and have conversations with them,” Schultz added. “We’re not entitled to their service.”

“For Love of Country” will be available in participating U.S. Starbucks stores and store.starbucks.com starting Nov. 4, as well other retailers where books are sold. The authors will donate proceeds from the sale of this book to Onward Veterans, a donor-advised fund of the Schultz Family Foundation that supports veteran service organizations that enable veterans and their families to make successful transitions to civilian life.

Starbucks, HBO and Chase present THE CONCERT FOR VALOR – a first-of-its-kind live concert to honor the courage and sacrifice of America’s veterans and their families on the National Mall in Washington, D.C. The star-studded concert on HBO will be free for all to view or attend in person on Veterans Day, November 11, beginning at 7:00 p.m. ET/4:00 p.m. PT. 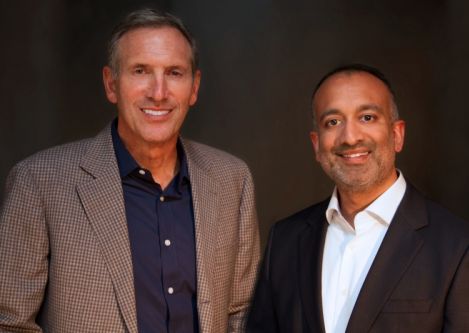