SEATTLE, 2014-11-7— /EPR Retail News/ — When Starbucks launched its groundbreaking commitment to support veterans and military spouses in November 2013, the company also announced that it would give special designation to stores that serve military communities.

Tim Bomke, Starbucks manager for military and veterans affairs and a U.S. Army veteran, was part of the team that traveled around the country to scout future store locations. They soon realized there were many more communities that could benefit than they had imagined with the original Military Community Store model.

“All Starbucks stores should reflect the communities they serve,” Bomke said. “When we traveled to military communities across the country, we heard from our partners and customers that we want more of these places where we can connect in a more personal way.”

Each store will help catalyze Starbucks veteran hiring efforts and connect to its community through relationships with the local military base and with veterans service organizations. They will also honor Starbucks partners and customers with design components, such as special murals. Stores will also offer merchandise that reflect the company’s appreciation for military service.

Starbucks is supporting and recognizing veterans, reservists and military spouses in several ways this November: 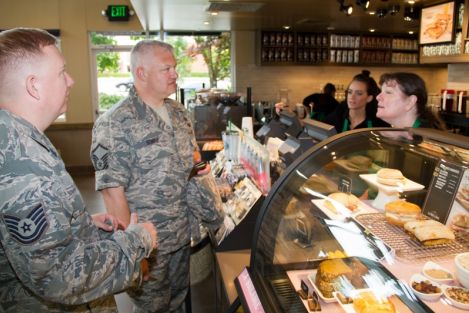