Howard Schultz, Starbucks chairman, president and ceo, posed that question early in the year during the company’s Annual Meeting of Shareholders. In the months that followed, Schultz and Starbucks partners (employees) have answered the question by demonstrating what it means to be a company that is performance-driven through the lens of humanity. Here are 10 ways Starbucks supported its partners, customers and communities in 2014.

After a massive landslide engulfed the tiny community of Oso, Washington, rescue workers faced the daunting task of finding signs of life in a 300-acre area strewn with trees, boulders, obliterated buildings and debris as deep as a seven-story building. Rescue crews eventually recovered the bodies of 43 people.

Jen Bilow manages the Starbucks store in Arlington, 20 miles west of the disaster zone. Twice a day store partners delivered food, hot water, and 40 gallons of coffee to firefighters, police and rescue crews. “We all wanted to help and we jumped in to help because that’s the kind of people Starbucks hires,” she said. “It’s the right thing to do for our neighbors.”

As supporters of the Seattle community, Starbucks and the Seahawks teamed up again to raise money for A Better Seattle (ABS), an initiative founded by Head Coach Pete Carroll. ABS partners with YMCA’s Alive & Free street outreach program to connect high-risk youth with programs and services that support them in making choices to reach a better future.

For more than ten years, Starbucks has also supported music and arts programs for youth in Seattle through a partnership with the Seattle Theatre Group. One result of that partnership is Little Big Show, a concert series created to benefit Seattle’s arts organizations. Little Big Show’s mission is to identify non-profits that focus on youth arts education and feature them as the show’s beneficiary receiving 100% of the ticket sales revenue.  To date, Little Big Show has raised more than $130,000 for nine local initiatives.

Somewhere in the world, nearly every day of the year, a Starbucks partner is volunteering in his or her neighborhood. Community service is a year-round commitment for Starbucks, with a special emphasis placed on making a difference through volunteer projects in April – the company’s Global Month of Service.

During the month of April in Beijing for example, over 900 partners and community volunteers completed dozens of projects. Along with painting murals, they planted a vegetable garden for 50 elderly families and taught classes on environmental education and personal safety for more than 500 students.

In April, Starbucks partners, customers and nonprofit groups united to work on 1,691 projects in one month. Together they spent more than 232,244 hours volunteering on projects that impacted an estimated 1.4 million people.

Starbucks has a long history of wanting to do more for its partners; it was one of the first U.S. retailers to offer affordable and comprehensive health coverage to part-time employees. In the summer of 2014, it announced another major benefit – the Starbucks College Achievement Plan.

About 1,000 Starbucks partners started classes through ASU’s online program. In December the program had its first graduate – Kaede Clifford, an almost 13-year partner who finished her BA in Mass Communications and Media. TheStarbucks Newsroom will share Clifford’s story in January.

For the first time, Starbucks raised the Pride Flag atop its Seattle headquarters. The 38-feet wide by 19-feet tall rainbow flag flew during the week leading up to the city’s Pride Parade. Members of Starbucks Partner Pride Network Alliance Network led the flag-raising effort. The affinity group has been around for about 15 years and in 2007 it became an official partner network. The company’s support for LGBT partners and customers goes back even further.

“Given our public stance on diversity and inclusion of all people, particularly on this issue, it makes sense to raise the flag in celebration,” said Lucy Helm, Starbucks executive vice president, general counsel and secretary. “Being open, inclusive and forward-thinking is at the core of what Starbucks is about.”

As Americans around the country grow increasingly frustrated with the partisan gridlock in Washington, a few mayors are looking to neighborhood Starbucks stores to help spark local action.

Through the Solutions City℠ initiative, mayors in five cities – Sacramento, Baltimore, Columbus, Orlando, and Phoenix – are bringing together constituents and other local leaders for town hall meetings in their neighborhood Starbucks store. They’re identifying and tackling civic challenges around three key issues: providing access to education, supporting veterans, and empowering opportunity youth (young people who aren’t in school or employed for a variety of reasons, but want to improve their futures).

Over the arc of one year, they will solve community problems identified through the community meetings. While Starbucks will serve as the arena for these community conversations, the U.S. Conference of Mayors will lend its network of dedicated mayors from around the country to help share best practices and spark greater impact.

For the past 10 years, Starbucks and the Schultz Family Foundation have supported a barista skills training program for opportunity youth. Nearly 500 young adults have graduated, with 70 percent securing jobs in the retail and customer service sectors.

In 2014, Starbucks, the Schultz Family Foundation and YouthBuild USA launched a national version of this effort called theRetail Excellence Training Program. This national program gives students an opportunity to learn customer service skills based on the same training Starbucks store partners receive. The instruction includes classroom learning and on-the-job experience in retail or café settings. In addition to Seattle, the Retail Excellence Training Program is available in Gulfport, Mississippi and Harlem, New York at YouthBuild sites in those communities. About 170 students graduated this year.

Over the past several years, challenging growing conditions in Chiapas, Mexico have created a climate where coffee rust has taken hold and decimated some coffee farmers’ harvests. Coffee rust is a fungus that damages coffee plants when not properly managed through proper growing techniques and integrating coffee varietals that are more rust resistant.

Recognizing the impact that rust is having on farmers, Starbucks Mexico launched a program called Todos Sembramos Café, which means “we all grow coffee.” Through the program, 100 percent of the profits from Shade Grown Mexico Whole Bean Coffee sold in Starbucks Mexico stores from June through December will be donated to purchase rust resistant coffee plants for Chiapas coffee growers who need assistance renewing their plots.

The program is part of Starbucks ongoing, comprehensive commitment to supporting coffee farmers around the world. Over the past forty years, Starbucks has invested more than $70 million in collaborative farmer programs and activities including C.A.F.E. Practices, farmer support centers, farmer loans and forest carbon projects.

Starbucks continuously engages in discussions with its partners to determine how to make their experience better and more valuable. In a letter to partners this fall, Starbucks chief operating officer Troy Alstead announced several improvements to the partner experience. One example is an updated dress code policy which allows visible tattoos for the first time. In January 2015, Starbucks will begin rolling out the first phase of a multi-year investment in the partner experience by making enhancements in three areas: performance and pay, recognition and benefits.

Starbucks chairman, president and ceo Howard Schultz held an impromptu meeting on December 10th in company’s Seattle headquarters that many partners said was “the most emotional, powerful discussion” they’ve ever been a part of. For more than an hour, Starbucks partners representing various ages, races and ethnicities passed a microphone and shared personal experiences regarding racial issues in America. “The current state of racism in our country is almost like humidity at times. You can’t see it, but you feel it,” said one partner.

Schultz intends to continue the conversations across the country through a series of partner-only forums beginning in January. The meetings will be held in Oakland, St. Louis and New York City.

Starbucks iconic green aprons added three new colors this year for partners who are veterans or military spouses – red, white and blue. A small flag has been added to spark conversations between partners and customers, and to honor the partners’ service and sacrifice.

In addition, Starbucks announced plans to open 12 Military Family Stores near military bases in fiscal 2015 and Starbucks has hired 1,048 new partners as a direct result of its multi-year hiring and career development strategy. The company has committed to hiring at least 10,000 veterans and military spouses by the end of 2018. Of the new hires in 2014, the majority are beginning their Starbucks careers in stores as baristas, shift supervisors, store managers, district managers and regional directors. In addition, about 60 are working in 18 corporate departments including store development, global operations and supply chain operations. Starbucks partners who’ve joined the company since the announcement of the veterans hiring initiative represent 48 states.

Inspired by the military men, women and families he’s met in the past year, Schultz co-wrote a book in 2014 called “For Love of Country: What Our Veterans Can Teach Us About Citizenship, Heroism, and Sacrifice.” In the book, Schultz and Washington Post senior correspondent Rajiv Chandrasekaran highlight the post-military careers of veterans serving their communities in extraordinary ways, and offer compelling accounts of valor displayed by service members in Iraq and Afghanistan. In a first-of-its-kind event, HBO, Chase and Starbucks also staged “The Concert for Valor” to raise awareness of issues affecting veterans.

Alone and scared, Josephine couldn’t understand why her family abandoned her when she was five years old. The little girl in Rwanda also didn’t know why she was sick all the time. She eventually learned the reason for both. She had contracted a virus from her mother in utero; HIV- the human immunodeficiency virus that causes AIDS. Josephine is one of approximately 35 million people worldwide living with HIV/AIDS. Now in her twenties, she receives medical treatment and counseling. Her care is supported in part by the Global Fund to Fight AIDS.

The Global Fund finances programs delivering prevention, treatment, counseling, HIV testing and care services in more than 140 countries. It receives financial contributions from (RED)®, a charity organization founded in 2006 to engage businesses in the fight against AIDS. Starbucks partnered with (RED) in 2008 and since then the company and its customers have generated more than $12 million for the Global Fund.

“Being able to help people in another part of the world is a powerful thing, and it’s humbling to observe the impact from these donations,” said Lindsey Austin, a Starbucks brand manager who works in the company’s headquarters and has been involved with the (STARBUCKS)RED program since its inception. 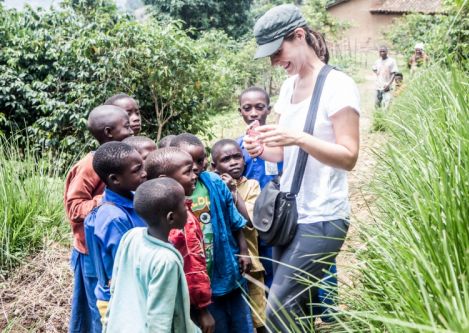 Starbucks summarized the 10 ways it supported its partners, customers and communities in 2014