SEATTLE, 2014-12-29 — /EPR Retail News/ — It has always been and always will be about quality. Since 1971, Starbucks has been passionate about ethically sourcing and blending only the finest arabica coffee beans and roasting them with great care. The company’s passion for coffee is rivaled only by its love of sharing it with customers. Here are 10 special coffees featured on the Starbucks Newsroom in 2014:

Hacienda Alsacia is a coffee farm resting Starbucks owns on the slope of the still-active Poas volcano. More than 300,000 pounds of coffee were harvested in the farm’s first year under the guidance of Starbucks (Starbucks purchased 396 million pounds of green coffee in fiscal year 2013).  Instead of selling the first crop of coffee from Hacienda Alsacia to customers, Starbucks gave a bag of the special coffee to each of its partners.

Six years ago, in partnership with a local cooperative, Starbucks director of global agronomy planted a special coffee on the La Ines farm. The team was looking for the perfect union of disease tolerance, high yield and exceptional taste. “This truly was a labor of love,” said Carlos Mario Rodriguez. “We selected only two plants each out of lots of 20 and then nurtured the plants for six years.” The result is Starbucks Reserve® Costa Rica Geisha La Ines. Geisha takes its name from the village in Ethiopia where it was first discovered before being brought to Central America.

In Swahili, Kati Kati simply means “between.” Starbucks Kati Kati Blend® tells a vivid story about the coffee grown between Kenya and Ethiopia. It is an example of the art of blending and roasting in action. The blend of these iconic East African origin coffees highlights the balance between citrus and spice notes from Kenya and subtle floral aromas and crisp acidity from Ethiopia, embodying the carefree nature of the summer season that is Kati Kati.

Starbucks® Colombia Nariño coffee comes from a region in southeast Colombia on the border with Ecuador known as Nariño. Nariño’s unique characteristics create an exceptional coffee growing climate. The mountain area gets more than 70 inches of rain per year and plenty of sunshine. The region’s volcanic soil has a high percentage of organic material. “For us, the heart of Colombian coffee sits in the mountains of Nariño,” said Leslie Wolford, Starbucks senior green coffee specialist.  “Coffee grows at elevations higher than 6,500 feet, where warm tropical days and cool nights let the beans develop slowly.”

Starbucks created Tribute Blend® to celebrate the company’s 40th anniversary, to honor customers and partners, and to recognize the accomplishments of the coffee producers and roasters. Tribute Blend® combines four of customers’ all-time favorite coffees from all three growing regions. The Sun-Dried Ethiopia coffee, with an exotic flourish of dark cherry, is from Africa. Aged Sumatra comes from the Asia/Pacific region, featuring deep notes of cedar and sweet. Also originating from the Asia/Pacific area is the Papua New Guinea coffee, a deep-toned coffee with juicy herbal taste. Colombia coffee, with balanced and nutty tasting notes, hails from Latin America.

Single-origin coffees are beans sourced from one country, a region within a country, or sometimes even just a single estate or farm. Starbucks® Guatemala Laguna de Ayarza Single-Origin Coffee is one of three coffees made available in grocery stores in 2014. Starbucks has been purchasing coffee from Guatemala since the early days of the company. Laguna de Ayarza is a double caldera lake formed thousands of years ago in a volcanic mountain range in the northeast part of Guatemala. The coffee trees thrive in the rolling hills and mild climate, and roots grow deep in its volcanic soil rich in minerals.

There’s a story in every cup of Starbucks coffee. From the qualities of the soil, to the fragrances and tastes of nearby crops, to the length of time it was left to ripen on the tree – each coffee expresses its own sense of place and conveys the way it was grown and nurtured. Starbucks Reserve® coffees help bring these individual stories to life with an ultra-premium line of coffees that are the most rare, limited availability coffees from around the world. “Starbucks is one of the few companies that can send coffee buyers to dozens of countries each year and taste hundreds and thousands of cups of coffee,” said Leslie Wolford, senior coffee specialist at Starbucks. “Every so often we come across a coffee that dazzles. We help their exceptional qualities shine as a Starbucks Reserve coffee.”

Launched as part of the first anniversary celebrations in 2013, the Starbucks® India Estates Blend captures the essence and rich heritage of Indian coffee history and draws inspiration from the finest arabica beans which have been carefully selected by Starbucks coffee experts from Tata Coffee’s estates across Coorg and Chickmagalur, the birth place of coffee in India. This single origin blend creates a fine balance between herbal and chocolate notes. The blend has been named to represent the origin of the coffee and the packaging has been carefully created to reflect traditional Indian designs, and this year the coffee was made available throughout 14 countries.

When Starbucks opened its first stores outside of Seattle, in 1987, it wanted to introduce a blend to honor one of its new locations in Chicago.  Starbucks master coffee blenders brought together the heft of beans from Latin America and Indonesia with a bit of sweetness from our dark Italian Roast. This created a taste every bit as sophisticated as the neighborhood it is named after – the Gold Coast Historic District. Starbucks Gold Coast Blend® is the epitome of the high art of blending because no single flavor element dominates this lush and lavish coffee.

To celebrate the opening of Starbucks® Reserve Roastery and Tasting Room, the company created an exceptional new coffee exclusive to the Roastery. Pantheon™ Blend is a blend of Starbucks® Reserve coffees from Guatemala, Colombia and West Java with tiered flavor notes of lemon, dark chocolate and brown sugar. The result is an exceptional cup that is complex and sophisticated as espresso and brewed coffee. The Starbucks Newsroom will feature the story behind Pantheon in January. 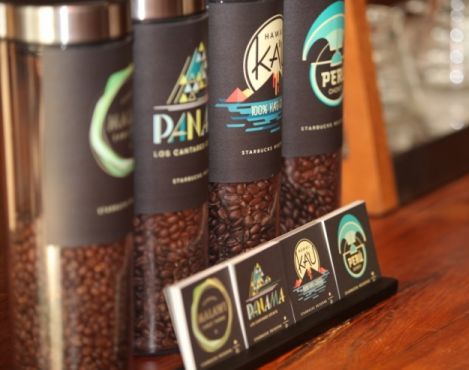 10 special coffees featured on the Starbucks Newsroom in 2014