SEATTLE, 2015-7-2 — /EPR Retail News/ — On a rainy Seattle afternoon this past April, members of Starbucks Armed Forces Network (AFN) didn’t let the weather stop them from volunteering at an urban farm. They planted, mulched and got covered in mud — all to help grow fruits and vegetables for local homeless veterans. They have returned to work at the farm each month since.

The AFN was founded in 2007 to bring partners who served in the military together to bond over their shared experiences, to provide guidance for newly hired partners transitioning from military to civilian life and to create a veteran-friendly workforce. A small group of AFN members were also instrumental in helping the company launch its commitment to hire 10,000 veterans and military spouses by the year 2018.

Richard Chambers, a veteran who served in the U.S. Air Force for 23 years, is the current vice-chair of the AFN chapter in Seattle. Over the past year, Chambers has witnessed a surge in the number of field chapters established across the U.S.

“After Starbucks announced its military hiring commitment, visibility to the AFN picked up,” said Chambers. “Partners around the country who are passionate about veterans began to inquire about starting chapters in their cities.”

As a result of the new field chapters, Starbucks has provided additional resources for new and existing partners who are veterans and military spouses, built deeper relationships with military bases across the country and increased participation in volunteer activities. The work of the AFN is vital to Starbucks as it continues to hire and support those who have served in the Armed Forces and their families.

Today, there are six Starbucks Armed Forces Network field chapters with seven others currently in development.

“We create goals and strategies for the year and share them with the field chapters,” said Chambers. “They can use them, modify them or come up with their own. We encourage them to make strategic decisions based on the needs in their cities or regions. We are here for guidance should they need it.”

In June 2014, Frank Adams, a Starbucks partner resources manager in Massachusetts, established the first AFN field chapter in the Northeast region of the country.

“I was inspired by our commitment to hire veterans and military spouses,” said Adams, who is an Army veteran. “I started thinking about what we could do locally to help with the effort.”

Adams hosted conference calls with partners in his region to discuss veterans-related causes and coordinated community service events. Shortly thereafter, he recruited partners to join a board and increased membership for the Northeast chapter.

One of the main goals in the region is to amplify Starbucks Roll Call, a website where partners can voluntarily identify themselves as veterans, reservists or military spouses.

“Our board members are committed to reaching out to every local partner who signs up on our Roll Call,” said Adams. “We are also developing a welcome kit for them to share resources and activities with a military focus.”

After building the Northeast AFN chapter, Adams shared his experience with the team in Seattle to help create tools for subsequent field chapters. He has also provided direct guidance to new AFN leaders.

“Being an early adopter, I work with new chapters as they spring up,” he said.

A Passion for Service and for Those who Serve

Patricia Revollo is a district manager in San Antonio, Texas benefitting from Adams’ expertise. She is developing an AFN field chapter for the South Central region, which will include several cities in Texas and Oklahoma. While Revollo does not have a military background, she has embraced service members for their work and sacrifice.

“For me it’s personal,” said Revollo. “I was born in Costa Rica, but became a U.S. citizen in 1988. On that day, I not only took an oath, I also made a vow to always thank military personnel for their service.”

San Antonio has a major military presence with four bases located there. Revollo and her team of store partners have been actively involved with the local military community over the past eight years. They conduct monthly coffee tastings at the Center for the Intrepid, and have teamed up with the Texas Veterans Commission at job fairs to share what opportunities are available for veterans at Starbucks.

“Community service is my personal passion, especially when it relates to military personnel and their families,” said Revollo. “Texas and Oklahoma have a strong military presence, so it’s only fitting that the South Central region has their own AFN chapter. We have big plans.”

As additional field chapters come to life, Starbucks will continue enhancing its commitment to veterans and their families.

“When this all started, we wanted to have a safe place for veterans to go to ask questions,” Chambers said. “I’m so proud of how the AFN has evolved into a true support system for military partners in our stores and offices across the country as well.” 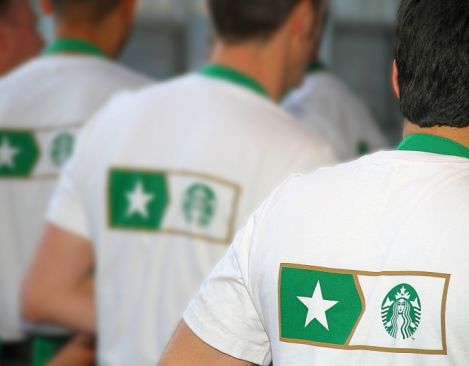 Starbucks committed to hire 10,000 veterans and military spouses by the year 2018