A new shop for emerging and advanced designers

Following the Nordstrom Creative Project team’s first initiative of Pop-In@Nordstrom, which launched in October 2013 under the direction of Kim, SPACE continues the team’s goals of creating new, interesting and unique experiences for customers and introducing them to the best up-and-coming brands and new talent.

“Conceptually SPACE is very boutique-like, offering not just clothing or shoes but a full wardrobe in one small environment,” said Kim. “I want this to be a place of inspiration and education. A lot of these pieces are new and directional, but I want it to always feel inclusive. SPACE is a part of the Nordstrom ethos of offering the best of what’s out there.”

The store design was built with artistic elements and pops of color to distinguish the shop from the rest of the retail floor – think pink mannequins, mixed materials and art objects to accent the area. Kim worked with the Nordstrom design team to create a framework that feels open and airy, then decorated each SPACE with work from artists, furniture makers and artisans so each feels uniquely warm and inviting.

Additionally, the SPACE online boutique offers editorialized styling, compelling content and storytelling around its brands in a unique site and mobile experience.

SPACE is found in the following flagship Nordstrom stores and online:

Renderings of SPACE are available here.

ABOUT NORDSTROM
Nordstrom, Inc. is a leading fashion specialty retailer based in the U.S. Founded in 1901 as a shoe store in Seattle, today Nordstrom operates 304 stores in 38 states and Canada. Customers are served at 118 Nordstrom stores in the U.S. and Canada; 178 Nordstrom Rack stores; two Jeffrey boutiques; and one clearance store. Nordstrom also serves customers online through Nordstrom.com, Nordstromrack.com and HauteLook. The company also owns Trunk Club, a personalized clothing service serving customers online at TrunkClub.com and its five clubhouses. Nordstrom, Inc.’s common stock is publicly traded on the NYSE under the symbol JWN.

ABOUT OLIVIA KIM
Olivia Kim has served as the Director of Creative Projects for Nordstrom since February 2013.  In her role, Kim focuses on creating energy, excitement, and inspiration throughout the retailer’s locations.

A prominent figure in the fashion industry, prior to joining Nordstrom Olivia was a founding member of and Vice President of Creative at Opening Ceremony where she was responsible for the retailer’s leadership in merchandising and store planning, art direction, and collaborative projects. Past projects include partnerships with Proenza Schouler, Rodarte, Nike, Levi’s, TOPSHOP, Chloe Sevigny, and Yoko Ono, to name a few.

Kim has also played an essential role in launching emerging designers such as CFDA nominated brands as Suno, Pamela Love, and Patrik Ervell. Kim is a long-time champion of emerging designers, which is evident in her brand selections in SPACE and Pop-In shops (where you might find Brother Vellies next to Rodarte). In 2015, Kim was selected to join the prestigious ANDAM jury, which supports young designers. 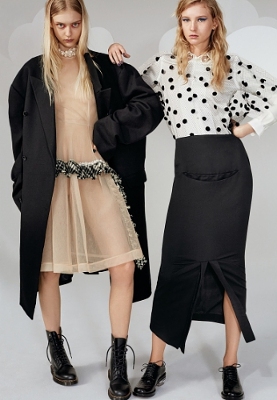