“We learned that the black coffee market in Japan is growing and consumers are drinking it outside of a cafe environment,” said Stephanie Choi, brand manager, Global Ready-to-Drink Innovation for Starbucks. “We began to investigate how we could bring a Starbucks® roast to Japanese consumers in a premium way and in a ready-to-drink format.”

Starbucks® Pike Place Roast®, which represents the rich history of the company, was selected as the perfect coffee to feature as an RTD beverage. A group of Starbucks partners in Seattle and Japan collaborated with Suntory to develop the new drink. Ayumi Aoki, an eight-year Starbucks partner (employee) and senior product developer was part of this team.

“We worked to capture the nuances of Pike Place Roast to deliver an experience that’s inspired by our cafes,” said Aoki. “We were able to create a drink that is delicious both hot and cold.”

The Black Coffee Pike Place® Roast will be available in convenience stores in Japan, which are very popular throughout the country.

RTD beverages are often placed in a chilled case and “hot box,” which is a storage space with a controlled temperature setting that provides options for consumers looking for hot or cold beverages.

In addition to providing the best pure black coffee drink with no sugar or milk added, the Starbucks and Suntory teams looked for the ideal way to package the new beverage.

“One of the trends we are seeing in Japan is the use of the premium aluminum bottle can,” said Choi. “It’s resealable and portable, which makes it an ideal option for those on the go.”

The design elements featured on the aluminum bottle can were also important. Deb Ladwig, creative manager of Starbucks Design Studio, helped to create a label that set the beverage apart and celebrates the heritage of the Pike Place store in Seattle.

“We incorporated many of the elements that represent Starbucks first store,” said Ladwig. “The background on the label is actually the texture you see on the floor of our Pike Place location.” 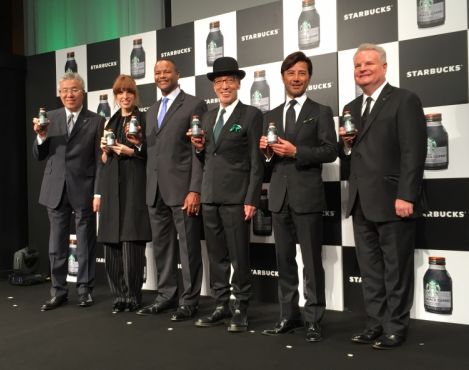