SEATTLE, 2016-May-10 — /EPR Retail News/ — Starbucks partners are known for the skillful way they handcraft beverages and interact with customers. Lately, there’s something else they’re known for as a result of the Starbucks College Achievement Plan. More partners are college graduates, after finishing their degrees with Starbucks support.

First introduced in June 2014, Starbucks College Achievement Plan creates an opportunity for all eligible U.S. partners to earn their bachelor’s degree with full tuition reimbursement for every year of college through Arizona State University’s (ASU) top-ranked online degree program. Starbucks is committed to helping at least 25,000 partners graduate by 2025.

Currently, there are currently more than 5,200 Starbucks College Achievement Plan partners, and 100 are candidates for graduation from ASU. About 55 of those partners will attend graduation ceremonies on campus, including today’s Undergraduate Commencement at Chase Field in Phoenix.

Four Starbucks partners share their college journey and the role that family has played in their success towards graduation in May.

‘Financially, school was a struggle’

Five months after joining Starbucks, Victoria Warren, now a store manager in St. Cloud, Florida, helped her sister Emily land a job with the company. Both sisters also enrolled at the University of Central Florida, but tuition costs were high.

“Financially, school was a struggle,” said Victoria. “I couldn’t work as much as I liked because of my school schedule, but not working meant I couldn’t afford school.”

“I left Starbucks to get a fulltime job because I didn’t want student debt,” added Emily.

For two years, Emily focused solely on her new job at a jewelry store. Eventually, Victoria stopped going to school as well, but continued working at Starbucks, which had become a great career for her. When Emily saw on the news that Starbucks had launched the Starbucks College Achievement Plan, she immediately called her sister.

“I convinced Victoria to finish one semester to see how she liked it,” said Emily. “In the meantime, I called my former manager at Starbucks to ask for my job back.”

“I was skeptical about online school because I’m an interactive, hands-on learner,” added Victoria. “But I decided to give it a shot.”

Victoria found that she loved the program. Emily joined Starbucks once again and enrolled at ASU.

“The best part of the program is that it’s flexible and accommodating,” said Emily. “Everyone is really helpful from the moment you register until you graduate.”

“Going to school online opened up my availability to work and develop in my career at Starbucks,” said Victoria. “The balance between school and work was amazing. It couldn’t have been any better for me. Online courses saved me so much time.”

Attending school together was a special experience for the sisters.

“My sister and I were definitely competitive,” said Emily. “But this was good for us. It kept us motivated, so we could finish school at the same time.”

“It’s very cool to graduate from college with a fulltime job and great benefits,” said Victoria. “Most students have to graduate first and then look for a job. I’m proud of Starbucks for stepping up and helping partners receive their education.”

‘I always wanted to finish school’

After Khory Riley graduated from high school, he went straight to college at Philadelphia’s Temple University and started working fulltime to pay for tuition. By senior year, he was so burned out from the pace that he made the difficult decision to quit school.

“I thought to myself, ‘I just can’t do this anymore,’” said Riley, now a Starbucks benefits specialist. “There were not enough hours in the day or money in the bank to support me.”

After several years of working on the East Coast, he moved to Seattle with his partner and landed a job with the Starbucks Partner Contact Center – a resource for employees to call with company questions. As he answered questions for fellow partners about the Starbucks College Achievement Plan, Riley was immediately excited about the prospect of finishing his degree. Without hesitation, he enrolled in the program in 2014.

“In the back of my mind, I always wanted to finish school,” said Riley. “My grandmother wanted this for me too. She was an educator for 30 years and always encouraged me to take the few courses I had left and get my college diploma.”

Working fulltime and going to school was different for Riley the second time around.

“Back then I didn’t have confidence and I thought I had all the time in the world to get my degree,” he said. “Going to school online was a lot different. It was way more flexible and suited my busy work schedule.”

Riley will attend commencement at Chase Field today (May 9). All students – those who learn on campus and those who take courses online – are invited to walk in the ceremony and receive their diplomas.

“I feel awesome, although not having to do schoolwork feels odd at times,” Riley said with a smile. “When I get to Arizona and put on that cap and gown, I’m sure it will all sink in.”

What would you do if you weren’t afraid? That was the question Michelle Brown, a store manager in Sacramento, heard in 2014 as she attended a Starbucks development session. Brown acknowledged that fear was preventing her from going back to school. A week later Starbucks debuted its new program with ASU.

“I left work and cried the whole way home because I was so happy,” said Brown. “I signed up that day. I could go to school without being away from my kids. Starbucks helped to move every obstacle that had been in my way – a lack of time and money.”

Brown had earned her associate degree in 2000, but determined that continuing with school, working to cover expenses and taking care of her daughter was too much to handle. After being self-employed for many years, and having a second child, she joined Starbucks in 2009.

“I fell in love with Starbucks,” said Brown. “I didn’t intend for it to be a career at first, but I was taken in by the culture.”

Despite her great job, something was still missing for Brown until she started taking classes at ASU.

“I lacked confidence. I felt inferior to those who had their degrees,” she said. “Now I feel free. There’s no longer an unmarked box on my ‘to do’ list. Now, I have more control over my life and what I do next.”

Returning to school was a great benefit to Brown as well as her two daughters.

“As a parent, you want to see your kids do as much as they can, but my oldest daughter was just not motivated about school,” Brown said. “When she saw me go back to school, she started to show more interest. Her mindset changed and she improved her grades.”

Brown’s daughter, Sam, will graduate from high school a week after her mom receives a degree in Organizational Leadership from ASU. Sam will attend San Jose State University in the fall.

“What’s great is that my youngest daughter, Dani, is talking about where she will attend college,” said Brown. “There’s an excitement about school. Education is a conversation that’s very alive in our house.” 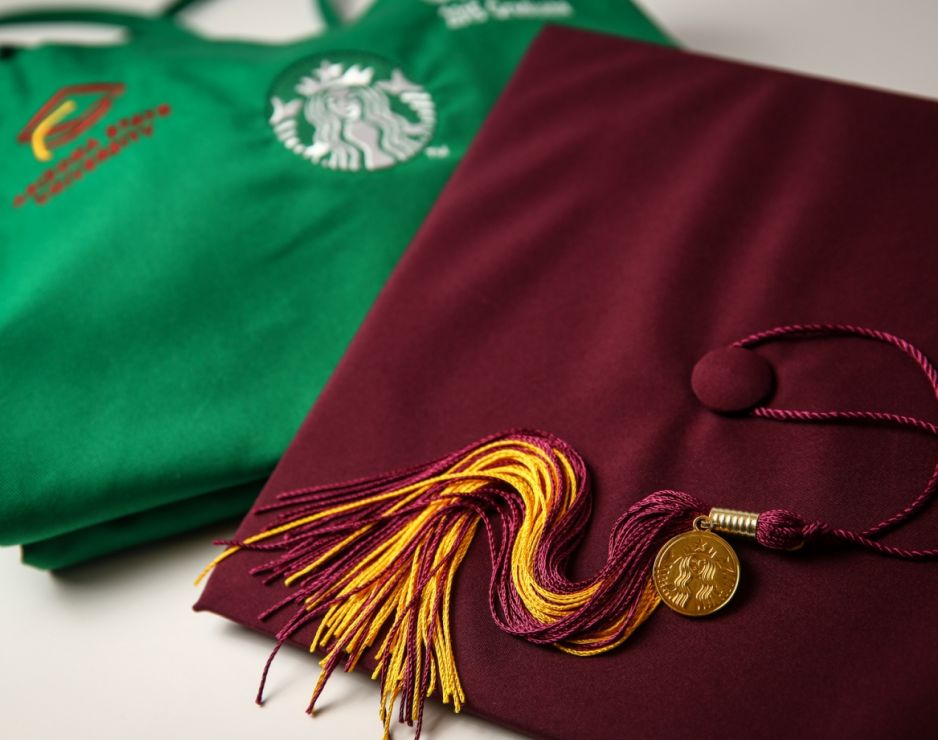