ALEXANDRIA, Va., 2016-Jul-08 — /EPR Retail News/ — Convenience stores sales surged over the first half of the year as lower gas prices fueled more driving and Americans embraced the continued addition of fresh and healthy food options, according to a survey of convenience retailers released today by the National Association of Convenience Stores (NACS).

Retailers also are selling more prepared foods and see food service as a growth opportunity: 64% say that they are confident in their ability to compete with quick-service restaurants for customers.

“It’s not a matter of ‘if’ we are going to evolve; it’s a requirement,” said Dennis McCartney with Landhope Farms Corp. (Kennett Square, PA), which is investing in new foodservice equipment to add new items to its menu.

As a result of strong sales and continued success selling new items, more than two in three convenience retailers (68%) say they are optimistic about their own business prospects and 63% are optimistic about the industry’s prospects. Sales this summer are expected to be strong because of “dry, hot weather and tourist traffic,” noted Rich Spresser with Pester Marketing (Denver, CO).

However, there are areas of concern. Retailer optimism over their own business prospects, while still strong, has dropped 20 points from the 83% who said they were optimistic a year ago.

The drop in optimism is led by bigger concerns about the economy. A minority of retailers (47%) now say they are optimistic about the overall U.S. economy, down from 61% a year ago. Retailers say they are apprehensive about regulations, especially those targeting wages, which could lead to higher direct store operating expenses.

Why the downward trend in overall optimism? The most common reason is summed up by Robin Gabriel with Shell Food Mart (Hinsdale, IL): “The election” and the overall negative political climate.

The quarterly NACS Retailer Sentiment Survey tracks retailer sentiment related to their businesses, the industry and the economy as a whole. A total of 110 member companies, representing a cumulative 1,905 stores, participated in the June 2016 survey.

Founded in 1961 as the National Association of Convenience Stores, NACS (nacsonline.com) is the international association for convenience and fuel retailing. The U.S. convenience store industry, with more than 154,000 stores across the country, conducts 160 million transactions a day, sells 80% of the fuel purchased in the country and had total sales of $575 billion in 2015. NACS has 2,100 retail and 1,700 supplier member companies, which do business in nearly 50 countries. 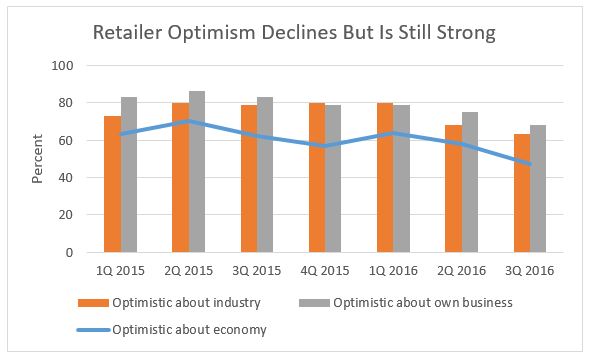