Since the inception of the program, the Drink Pink partners have raised $549,000 for the Canadian Breast Cancer Foundation (CBCF) through the sale of coffee at participating Co-op Gas Bars and Food Store delis — and the tally is still growing.

“Co-op and Van Houtte’s Drink Pink is a tremendous example of what can be accomplished when we come together with a common aim,” said Vic Huard, Executive Vice-President Strategy at Federated Co-operatives Limited (FCL). “Together with Co-op members and customers, we are helping the Canadian Breast Cancer Foundation support world-class researchers who are working to create a future free of this disease.”

Throughout October, 10 cents from every cup of coffee sold at participating Co-op locations will be donated to CBCF, which funds innovative research, health education and advocacy programs that aim to reduce the incidence of breast cancer, lower mortality rates and support women and their families who have experienced breast cancer.

“During the month of October, we encourage Canadians to visit participating Co-op locations to drink their Van Houtte coffee the way they love it best, whether it’s black, with milk, with sugar or not, but most importantly, to Drink Pink and support the cause.”

The Co-operative Retailing System — comprised of FCL and more than 200 independent retail co-ops across Western Canada — is also promoting breast cancer awareness through a series of videos in which survivors and family members share their experiences with the disease. For more information about Drink Pink — and to watch the videos — see www.drinkpink.coop.

Co-op is a longtime supporter of the CBCF. In 2014, it made a $1.5 million donation to the organization and continues to serve as a regional sponsor of the Canadian Breast Cancer Foundation CIBC Run for the Cure.

“We’re so pleased with how this program has evolved over the past six years,“ said Bernice Scholten, Executive Director, Western Canada, at the CBCF. “This success demonstrates the power and impact of strong, innovative local partnerships. Thank you to Co-op and Van Houtte, who continue to play an important role in the progression of breast cancer awareness, research and advocacy.” 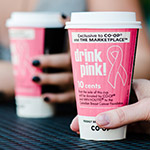