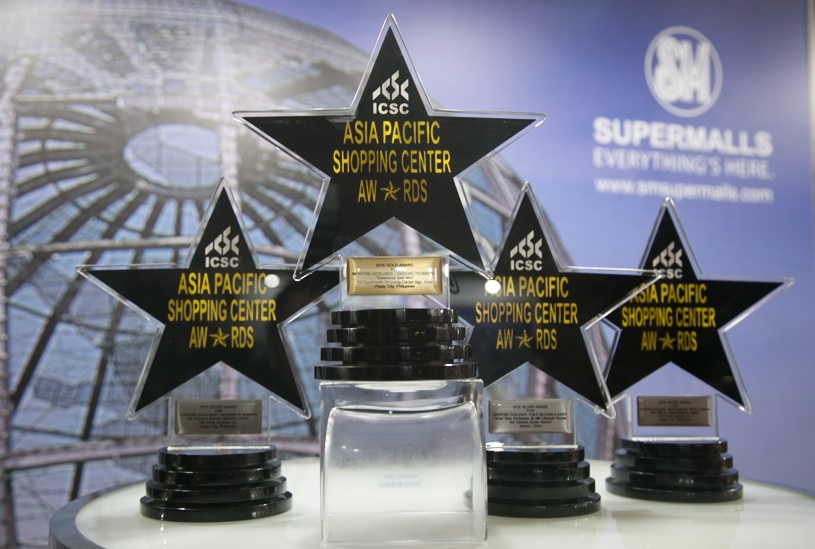 Pasay City, Philippines, 2016-Oct-13 — /EPR Retail News/ — The International Council of Shopping Centers (ICSC) awarded SM Supermalls with four major awards – one Gold, three Silvers, and one Certificate of Merit from the ICSC Foundation – under different categories from the prestigious International Council of Shopping Centers (ICSC) Global Awards for 2016. The awards affirm the company’s dominance in the local and regional markets covering various standards of the international shopping center industry.

Getting the Gold award is SM Supermalls’ breakthrough “Download & Win” mobile app under the Marketing Excellence for Emerging Digital Technology category. A key component of the mall’s digital marketing strategy, the campaign was launched as part of SM’s 30th anniversary celebration. It was also the first scratch card promotion in digital format ever implemented in the country. This award automatically makes SM eligible to win ICSC’s Global “Best-of-the-Best” Viva Award.

Another Silver award for Marketing Excellence went to SM’s “Bricks Click” Partners Summit under the Business to Business category. The 2-day event consisting of a Retail Forum and Partners Awards, initiated an exchange of knowledge on innovation among SM’s partners.

The third Silver went to SM Lifestyle Center Xiamen for its “Floral Tiles Christmas@SM Lifestyle Center” project, under the Public Relations and Events category. Its salute to the sentiments of old Xiamen and the preservation of the city’s heritage tiles got the nod of the ICSC judges.

A Certificate of Merit from the ICSC Foundation was given to SM City Marilao and SM City Baliwag for their campaign “Green Vision: The SM Mission”. The merit was the ICSC Foundation’s way of recognizing the excellent commitment of SM Prime Holdings Inc. towards the local community. The malls held a “green” concert, called “Green Guitar: A Concert for the Planet”, which was powered entirely through solar energy. This was a benefit project that provided the power supply for the livelihood activities of the Dioceses of Malolos’ Jubilee Shelter Program.

This is not the first time that the company received recognition from the prestigious international group. Earlier this year in April, SM Lifestyle Center in Xiamen received a gold award for its Future Architects campaign that highlighted green architecture and city planning. Some of SM Supermalls’ notable ICSC awards in the past include a Gold for the revolutionary “iButterfly Hunt” in 2012, and a Silver for the Mega Fashion Hall in 2015.

The year 2011 was especially meaningful when the ICSC Foundation gave SM Prime Holdings its highest honor, the Albert Sussman International Community Support Award, for the mall company’s quick deployment of relief aid to victims of typhoon Sendong (international name: Washi) in December 2011. Another Asia Pacific Community Support Award was given to SM for its Breaking the Poverty Chain campaign, which was a partnership with Gawad Kalinga in time for SM North EDSA’s 25th anniversary.

ICSC is an association of the global shopping center industry, with over 70,000 members from more 100 countries worldwide. Its members include shopping center owners, developers, managers, investors, retailers, brokers, academics, and public officials. The ICSC Global Awards is the association’s way of promoting excellence in the global retail real estate industry by recognizing outstanding efforts in marketing, design and development.