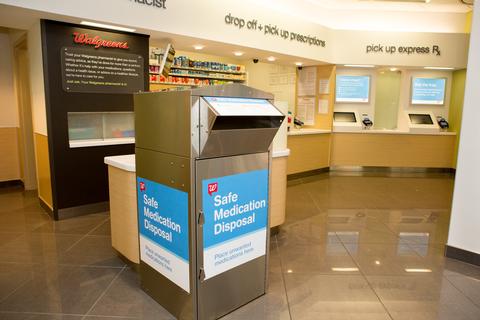 DEERFIELD, Ill., 2016-Oct-19 — /EPR Retail News/ — Walgreens today ( October 18, 2016) announced it has reached its goal of installing more than 500 safe medication disposal kiosks this year at its pharmacies in 35 states and Washington D.C. The program, first announced in February, is the first ongoing national effort of its kind by a retailer to combat drug abuse and will expand to two additional states, Nevada and Maryland, by early November.

Since the installation began earlier this year, more than 10 tons of medication have been collected and safely disposed. The kiosks provide a year-round, safe and convenient way to dispose of unwanted, unused or expired prescriptions, including controlled substances, and over-the-counter medications at no cost.

Safe medication disposal kiosks are available during regular pharmacy hours (24 hours a day at most kiosk locations) and offer one of the best ways to ensure medications are not accidentally used or intentionally misused by someone else.

(An interactive map of stores with a safe medication disposal kiosk is available at Walgreens.com/CombatDrugAbuse)

Walgreens has also made naloxone, a lifesaving opioid antidote, available without requiring a prescription in more than 3,800 pharmacies in 20 states in accordance with state pharmacy regulations. Next week, Walgreens will begin offering naloxone without a prescription at pharmacies in Colorado, Oregon and Utah and will continue to make the medication more accessible and easier to obtain in states where regulations allow.

“Walgreens has taken an important first step to reduce the misuse of medications throughout the country and curb the rise of overdose deaths,” said Richard Ashworth, Walgreens president of pharmacy and retail operations. “We are committed to being part of a comprehensive solution to reverse this epidemic and will continue our effort to make naloxone more accessible and easier to obtain.”

In states where a prescription is required for naloxone, Walgreens is available and eager to work with regulators to help update rules to allow for dispensing without a prescription. When implementation of the program is complete under current state pharmacy regulations, naloxone will be available without requiring a prescription in more than 7,000 of Walgreens nearly 8,200 stores.

When naloxone is dispensed instructions are provided on how to administer the medication, which includes calling 911 as naloxone is not a substitute for medical care, and anyone who is administered the medication should seek immediate medical attention.

Drug abuse continues to be a public health and safety risk. More Americans die every day from drug overdoses than from motor vehicle crashes, according to the Office of National Drug Control Policy. According to the Substance Abuse and Mental Health Services Administration’s 2015 National Survey on Drug Use and Health, nearly 19 million Americans misused a prescription drug in 20151. More than half of individuals who misused a prescription drug obtained it from a friend or relative.2

*Installation has begun and is expected to be complete in early November.

*Will begin offering naloxone without requiring a prescription on Monday, Oct. 24.

**Will begin offering naloxone without a prescription on Wednesday, Oct. 26.

Walgreens (www.walgreens.com), one of the nation’s largest drugstore chains, is included in the Retail Pharmacy USA Division of Walgreens Boots Alliance, Inc. (NASDAQ: WBA), the first global pharmacy-led, health and wellbeing enterprise. More than 8 million customers interact with Walgreens each day in communities across America, using the most convenient, multichannel access to consumer goods and services and trusted, cost-effective pharmacy, health and wellness services and advice. Walgreens operates 8,173 drugstores with a presence in all 50 states, the District of Columbia, Puerto Rico and the U.S. Virgin Islands. Walgreens omnichannel business includes Walgreens.com and VisionDirect.com. More than 400 Walgreens stores offer Healthcare Clinic or other provider retail clinic services.