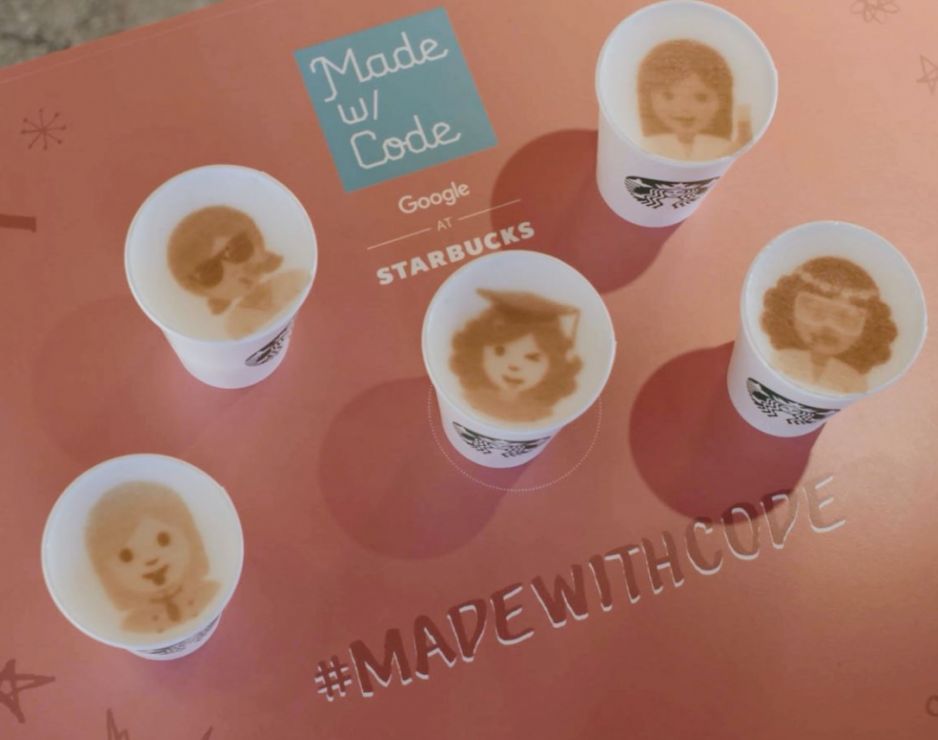 Seattle, 2016-Oct-22 — /EPR Retail News/ — Ten girls gathered at a Starbucks store in Seattle engaged in an energetic conversation. “Make her a doctor.” “She’s a graduate.” “Give her sunglasses.”

As curious customers looked on, the teens, most of whom had just met, spent an hour creating personalized emojis at a Google Made with Code event, held in Starbucks Olive Way store. The teens then used a Ripplemaker printer to apply the designs, which appeared as foam on Starbucks hot chocolate beverages.

Made with Code aims to drive excitement for computer science among teen girls by showing them how unexpected things can be made with code – computer language, or programming, behind apps, software and other types of technology.

Similar gatherings occurred earlier this month at Starbucks stores in the Bay Area, Denver, Austin and New York as part of a Google-led effort to connect teenage girls across the country with people and technologies that are shaping their future. Google Made with Code projects have addressed a variety of professional and societal topics, ranging from making an impact to film.

The participants at the Starbucks-supported event in Seattle were from the YWCA GirlsFirst program, which encourages leadership, instills confidence, develops skills and provides opportunities to girls of color.

“Exposing girls to science, technology, engineering and math will help enable feeding more than 9 billion people by 2050,” said Mary Wagner, Starbucks senior vice president of Global Product Innovation/Food Safety & Quality, referring to one of the looming challenges requiring scientific skills. “It’s fun to see these girls get excited about Starbucks and Google and recognize that there are jobs in these fields for women.”

Wagner began her career as a science professor at the University of Wisconsin–Madison in the 1980s. She said entrenched gaps between men and women in STEM (science, technology engineering and math) professions remain in place, and she thought there would be greater numbers of women in STEM professions by now.

While women make up almost 47 percent of the total U.S. workforce, they comprise 36 percent of chemists and material scientists, 27 percent of environmental scientists and geoscientists, 18 percent of computer software developers and just 12 percent of civil engineers, according to the most recent report from the U.S. Bureau of Labor Statistics.

April Krubally, who accompanied her daughter to the Seattle coding event at Starbucks, said she’s been working on breaking down some technology resistance from her child.

“Coding is something I’m interested in and I’m trying to move my daughter in that direction,” Krubally said. “She’s a little bit apprehensive about it, but I think the technology that they’re using today in a way that the girls are able to identify with is making her think, ‘OK, this is doable.’”