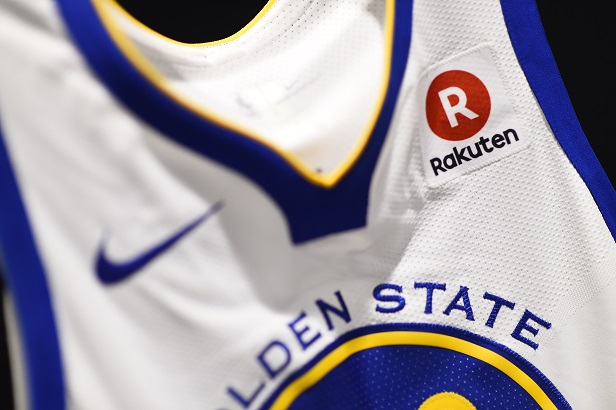 OAKLAND, CA, 2017-Sep-14 — /EPR Retail News/ — The NBA Champion Golden State Warriors and Rakuten, Inc. today announced a multi-year partnership to include the Rakuten logo on all Warriors jerseys beginning in the 2017-18 NBA season. The Rakuten badge will be featured on all of Golden State’s practice, regular, post-season and Summer League uniforms. For the first time in NBA history, the NBA approved the sale of jersey sponsorships, beginning with the 2017-18 season. The badges will be on the front left opposite the Nike logo and will measure approximately 2.5 inches by 2.5 inches and be adjusted to fit the dimensions of each sponsor’s logo.

“Rakuten is an innovative global leader that we knew would align well with our values and principles as an organization,” said Warriors President and Chief Operating Officer Rick Welts. “We have incredible fan support around the globe and this partnership is another way to not only continue to grow the Warriors brand globally, but also further connect with our fans in Japan, Asia and Europe.”

Founded in 1997 in Tokyo, Japan, as the world’s first successful merchant-focused e-commerce marketplace, Rakuten now encompasses over 70 businesses spanning e-commerce, digital content, communications and fintech that reach more than 1 billion members around the globe. Since 2012, Rakuten has been ranked in the top 30 of Forbes Magazine’s annual “World’s Most Innovative Companies” list. In line with its growing investment in the United States and its vision for global innovation, Rakuten established its Americas regional headquarters in the San Francisco Bay Area in 2015.

“We are thrilled to partner with the Golden State Warriors, one of the most successful organizations in sports today and one that shares our passion for positivity, teamwork and optimism,” said Rakuten, Inc. founder and CEO Hiroshi “Mickey” Mikitani. “Like FC Barcelona, the iconic soccer club we partner with, the Warriors are innovators in their sport that have helped create a more beautiful game through a distinct style of unselfish, teamwork-oriented play.”

The Warriors won the 2017 NBA Championship, the fifth title in franchise history and second in the last three years. The organization was also honored with the SportsBusiness Journal/Daily Sports Team of the Year award in both 2014 and 2016, along with Warriors Owner and CEO Joe Lacob earning the SportsBusiness Journal/Daily Sports Executive of the Year award in 2014.

The Rakuten partnership also includes entitlement to the Warriors Practice Facility, now named the Rakuten Performance Center, along with a significant representation with the Warriors traveling party and additional sales and marketing elements including in-arena signage, digital, social and radio.